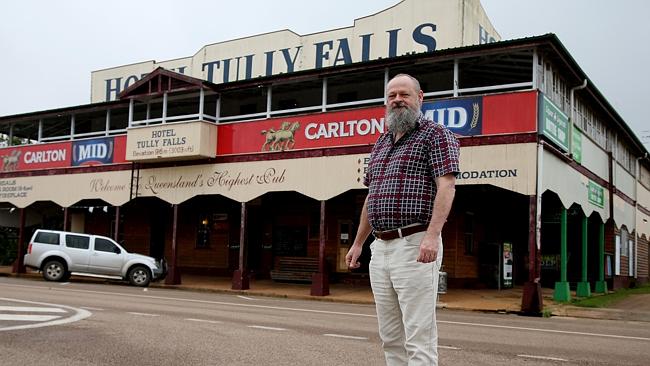 (NEWSCORP): LOST IN TRANSLATION: Ravenshoe folk reckon the town lays claim to the most beards in the country. There is competition held as part of the annual Torimba festival. Jim Battiscombe at the iconic Tully Falls Hotel in Ravenshoe. Picture: Stewart McLean Source: News Corp Australia

THE historic Hotel Tully Falls at Ravenshoe is back in the original family’s hands and will be renamed to stop confusion with the township of Tully more than 130km away.

Co-owner Wendy Stanford said it would revert to its original name of the Ravenshoe Hotel in September to coincide with its 87th birthday.

She said there was confusion with people thinking it was at Tully on the coast, 134km to the southeast.

Ms Stanford said it was renamed the Hotel Tully Falls in the 1950s when the Koombooloomba Dam was being built at the falls 39km away.

“We will rename it as it was originally named,’’ she said.

“It depicts the town and we want to promote Ravenshoe as a town.’’

“She remained the publican until 1940 when they retired,’’ she said. Ms Stanford said the family of her son Ryan Nasser owned and operated the pub from 1951 to 2001 and still had interests in the Barron Valley Hotel at Atherton.

“In August last year with my partner Wayne Edwards (no relation) we both wanted to retire back here after working in the mines and the pub had been for sale for quite a while,” she said.

“We bought it for a good price and we will restore it to its original glory.’’

Ms Stanford said the dining room was the first to be refurbished.

“It’s a lovely old timber dining room with a fireplace,’’ she said.

Ms Stanford said a new website was being created and the new name would adorn the pub in September with a weekend of celebrations, including a fine dining event.

Ms Stanford said her son Ryan was working at the pub.

The other hotel in the town is the Club Hotel-Motel.