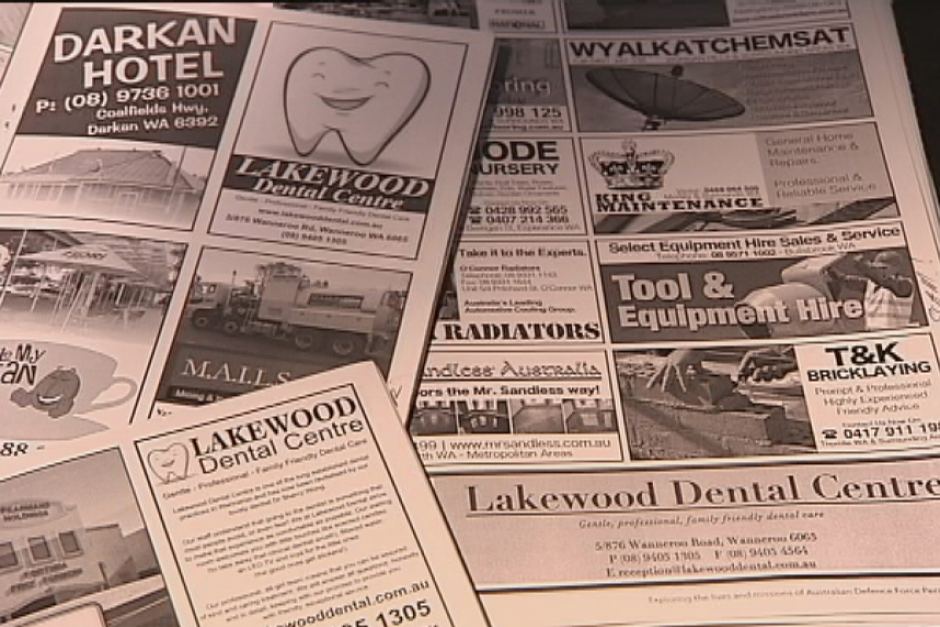 PHOTO: The magazine that scams small businesses also features fake ads for businesses that haven’t been in operation for ten years, an ABC investigation found.

TTN: A Queensland-based advertising scam has been targeting WA small businesses, tricking owners into paying $500 by saying they’d already agreed to a print advertisement; then following up with claims to more and more sets of $500. One small business owner, a cleaner, was duped out of $6500. A lawyer analysing the cases said prosecution had become difficult because, when pressured, the business-owners had technically ‘agreed’ to the payments.

Advertising scam targets WA businesses, cheating them out of thousands of dollars

Businesses are being urged to be on high alert for an advertising scam that has cheated Western Australians out of thousands of dollars.

Advertising or fake invoice scams have cost WA businesses tens of thousands of dollars so far this year, according to the Department of Commerce’s Consumer Protection division.

The premise is simple — scammers use high pressure tactics and confusion to force businesses into paying for advertisements they never approved.

Dozens of businesses are falling victim to the scam, but authorities say it can be difficult to pursue those responsible.

Perth cleaner Lisa Rae, who specialises in trauma scenes, was shocked to discover she had become the victim of an advertising scam.

“It’s almost like a violation and it was quite disgusting to get scammed out of nearly $6,500,” she said.

Last year, Ms Rae got a phone call offering her the opportunity to advertise in a magazine for around $500.

“They were telling me the magazine would go to hospitals, doctors surgeries and schools, so there would be a wide range of people that were actually looking at these magazines,” she said.

The scammers also suggested at least some of the proceeds would go towards charitable organisations, with the names of the publications implying connections with firefighters, volunteer groups and police.

Soon after placing the ad, Ms Rae was bombarded with calls from similar publications pressuring her to buy more.

“Their opening line was ‘you’ve already agreed to the ad, we’ve now printed the publication and we’d just like you to pay for it before we send it out’,” she said.

“Because the names [of the magazines] were very similar I thought ‘well perhaps I did [approve it] and just don’t remember’.”

When the magazines arrived in the mail, they looked cheap and were filled with pages of generic advice about bushfires and first aid.

“They didn’t have my information right, didn’t even have the right phone numbers,” she said.

“I tried to contact them to say it’s not right but I had no success, I could never get through to them.”

But the company had no trouble getting through to her and continued to call, claiming she had approved more ads and needed to pay for them.

“They actually got quite rude and abrupt,” Ms Rae said.

“As a small business owner I was scared of what they might proceed with, so after two or three phone calls I actually agreed to go ahead and pay for it.”

Scam works on the basis of confusion

Consumer Protection director of industry and consumer services David Hillyard says the selling of the ads is very murky from a legal perspective.

“It seems to work on the basis of confusion,” he said.

“The person who has answered the phone call isn’t sure if they’d had a working relationship with this advertising business before, so they’re often cajoled into agreeing with what they’re saying.”

A common approach for scammers is to cold call businesses, asking them to confirm details of an advertisement that was never requested in the first place.

If the business agrees, the scammer is then legally entitled to send them a bill for it.

Mr Hillyard said that made it very difficult to prove whether the tactics were illegal or just immoral.

“Where we get a business complaining to us saying ‘I didn’t authorise this’, when we get down to the tin tacks of working out what evidence we’ve got, we often find there have been conversations with people in the business whom [have given authority] to advertise and the case falls away,” he said.

Even if the publisher doesn’t get permission, it can still send an invoice that looks very similar to a bill, in the hope businesses will just pay it without checking.

Staff at a busy dental clinic in Wanneroo agreed to advertise in two magazines last year, but staff member Karen Reed said the clinic was then inundated with calls.

“We started receiving these phone calls that say ‘we’ve got these new magazines, you don’t have to pay immediately, don’t worry we’ve got your credit card details, everything is already in place’,” she said.

Staff were told the boss had already approved ads in three other magazines and needed to pay for them.

“They know the dentist’s name and know the whole setup so they let you feel that it’s from a genuine publication, which it was initially,” Ms Reed said.

The dental clinic ended up paying around $1,500 to place ads in a number of publications.

ABC tried to contact each of the 32 businesses listed in two of the magazines, and 16 of those reported a negative experience and felt they had been scammed.

Some had paid hundreds of dollars for ads they had never asked for after receiving phone calls demanding payment, while others had stood firm and refused to pay.

A number of businesses listed in the magazines are no longer operating, with at least one closed for 10 years.

The other phone numbers were disconnected or rung out.

Ms Rae said the same Queensland-based company owns seven publications, including several that she advertised in.

The ABC attempted to contact the company involved, but calls and messages went unanswered.

Consumer Protection is urging businesses to be highly wary of people selling ads over the phone.

“If there’s evidence of them operating illegally, then that’s our job to stop that,” he said.