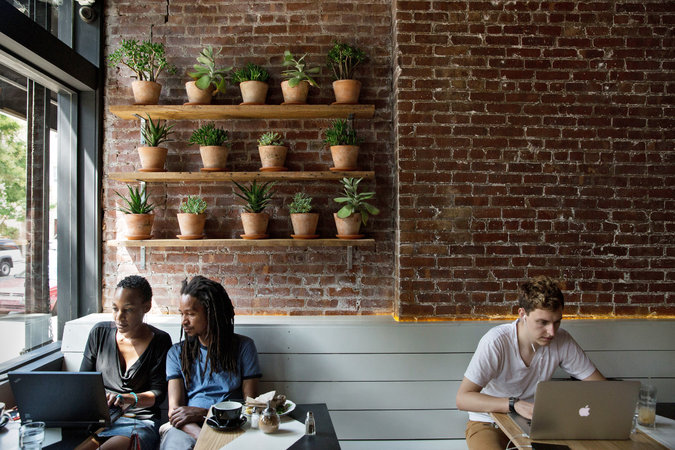 New York is a city of immigrants and their unofficial embassies offering a taste of home: the French bistro, the English pub, the California juice bar.

That Australians have anything to teach Americans about coffee culture may come as a surprise to casual drinkers. But those who nerd out on coffee know that Australia — Melbourne in particular — has a dynamic and professional coffee scene.

At first glance, an Australian cafe may seem like an American coffee shop with colorful idioms: brekkie (breakfast), a piccolo (a cortado), a flat white (a small latte) and “no worries” (you’re welcome). But it functions differently, and differs from the dozen or so Australian coffee bars in New York, which offer the coffee but not the full experience. For one, the cafes offer table service, with a waiter bringing your drink. Then there is food, usually simple, fresh, satisfying egg dishes and salads with close attention paid to the details, just as it’s done in Australia.

“You have these brekkie palaces, full-service restaurants with chefs and kitchens that are run by coffee roasters,” said Jordan Michelman, a founder of Sprudge, a website for coffee cognoscenti. “They’re doing more than filling a pastry case.”

Most coffee shops in the United States don’t do much with food, Mr. Michelman pointed out, and most restaurants don’t worry about coffee. The Australian cafe is a hybrid, and an unusual one.

There is also the attitude: a sunny disposition so genuine it could disarm the most brusque New Yorker.

“It’s going above and behind the regular service,” said Alexander Hall, who opened Brunswick in Bedford-Stuyvesant, Brooklyn, earlier this year. He plans to have 12 Brunswick locations in New York by 2016. “There are so many cafes in Melbourne, and the standard of coffee is so high, and the design is so high, the only way to differentiate yourself is with customer service.”

The accent helps. “You kind of go along with it, because believe it or not it’s still a novelty in this country,” said Mr. Hall, who tends to hire Australians on visas that allow them to work in the United States. “These young girls and guys are upbeat people, traveling around the world, having a good time. It’s breakfast. It’s not serious; it’s meant to be fun.”

Each cafe has a distinct personality: Bluestone Lane, in Greenwich Village, is stylish and relaxed, with the whitewashed walls and hanging planters of a tasteful beach house; Brunswick has the clean lines and clever light fixtures of a design store. But they all have one thing in common: the avocado smash.

Sometimes called an avocado toast (and in the United States often associated with California), it’s comfort food for any time of the day. You smash half a ripe avocado onto a thick piece of multigrain toast, season it with salt, pepper and chile flakes, then give it a splash of olive oil and a squeeze of lemon. Anything else is a flourish: dukkah (an Egyptian spice mix), toasted pumpkin seeds, a poached egg.

In Australia, cafes play a central role in a certain kind of lifestyle you find near the beach. “You wake up, go down to the beach, have a swim, then go have some coffee and poached eggs and toast,” said Henry Roberts, an owner of Two Hands.

Giles Russell, his business partner, said, “I surfed every day of my life until I came to New York.” He looked slightly sunburned after a weekend in Montauk, N.Y., waiting for waves that never came.

Mr. Roberts added: “You don’t have surfing here. But you have a lot of other opportunities that make up for it.”