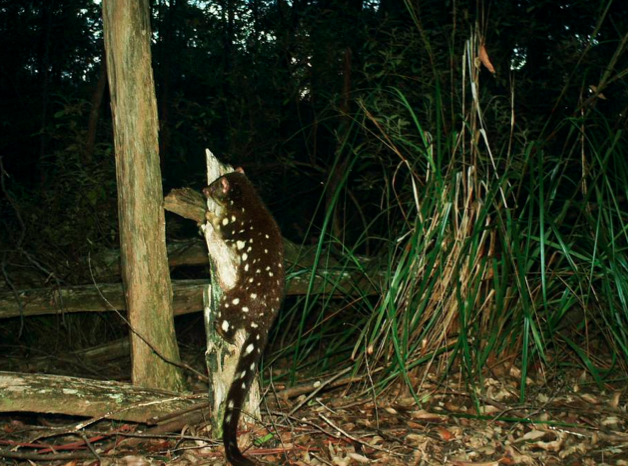 IT could be extinct in the wild in less than a decade but mainland Australia’s largest marsupial carnivore is alive and well deep in the Watagan Mountains.

An elusive but thriving tiger quoll population has been found  thanks to  motion-activated camera technology.

In this picture, a tiger quoll walks past the camera while a lyrebird, another shy Australian native, watches on.

Similar technology was used by police to capture images of former fugitive Malcolm Naden while he was on the run in the Barrington Tops in 2012.

University of Wollongong researchers baited their cameras with raw chicken in their quest to flush out the bird and possum-hunting predator.

The tiger quoll (Dasyurus maculatus) is an Australian native, roughly the size of a cat with distinctive white spots over its body.

Classified as endangered, there have only been a handful of sightings  in the Hunter in recent years.

The Watagan survey, which was funded by Lake Macquarie City Council with the assistance of Eraring Energy, Delta Electricity, and Oceanic Coal/Xstrata, aimed to provide information on the exact location and number of tiger quolls in the area.

The baited cameras were left for at least two weeks in an attempt to lure the predators.

The delighted researchers retrieved images showing evidence of what appeared to be a small but thriving tiger quoll population in the area.

‘‘The use of remote cameras has proved vital to the success of the project, allowing photos to be taken of the tiger quolls without the physical presence and interference of the scientists,’’ research team member Katarina Mikac said.

They also captured images of an array of other native and introduced species.

‘‘It seems the Watagan Mountains are not just home to tiger quolls, but also many birds, feral dogs and cats as well as inquisitive wallabies and small native marsupials such as bandicoots and potoroos,’’ Dr Mikac said.

Surveys have also occurred closer to urban development in Lake Macquarie, however, these are yet to detect tiger quolls.

Despite that, Dr Mikac said it was likely the Watagan population could easily travel to nearby areas such as Awaba and Wyee.

‘‘The remote cameras are providing a photographic gallery of the animals that live in the Lake Macquarie area and in doing so provide invaluable scientific data that will help manage the endangered tiger quoll and ensure it keeps its top marsupial predator status for a long time to come,’’ Dr Mikac said.

* Tiger quolls are more than 50 per cent larger than other quolls and, unlike the other species, have white spots that extend along their tail.

* Tiger quolls have bright eyes, a moist pink nose and sharp teeth. They have a pointed snout and a long tail. Their fur has a coarse texture and is red-brown to dark brown with white spots of varying size above and pale below.

* Tiger quolls are generally nocturnal and rest during the day in dens. However, juveniles and females with young in the den can be seen during the day and may leave their dens when it is light out.

* Tiger Quolls hunt mostly at night. Their diet appears to consist primarily of medium-sized mammals (up to 70%), including gliders, possums, rabbits, and even small wallabies. They also  like carrion (dead animals), birds and eggs. Small mammals, reptiles and invertebrates are also a significant part of the diet, particularly for juvenile quolls.

* Tiger quolls are found in a range of forest habitats, from rainforest to open woodland. They require forest with suitable den sites such as rock crevices, caves, hollow logs, burrows and tree hollows.

* The Tiger quoll has a large home range and can cover considerable distances (more than 6km) overnight. It is largely nocturnal and solitary.

* Both the species’ range and total numbers are believed to have declined dramatically since European settlement. Being nocturnal and extremely shy, the Spotted-tailed Quoll makes himself as scarce as he possibly can.

* This threatened hunter avoids human encounters, which makes the monitoring of this endangered species particularly difficult.

* Tiger quolls are generally not vocal, but vocalizations can be heard in any social interaction. Antagonistic or disturbed vocalizations are guttural huffs, coughs, hisses, and piercing screams.

* Some scientists believe that keeping quolls as pets could aid in their long-term conservation, but further research is needed on this topic to conclude whether this is true or false.