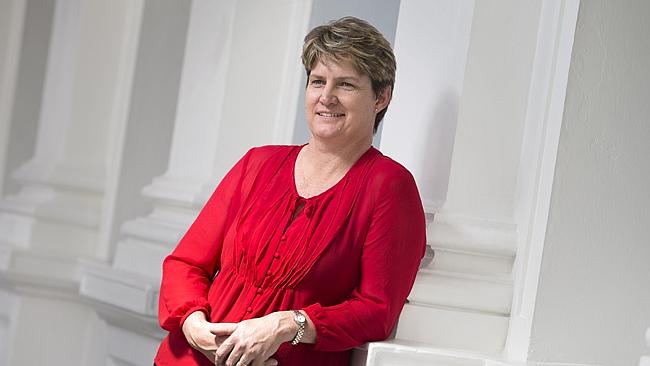 Picture from THE CAIRNS POST: Lyn O’Connor, petitioner against the Tablelands says she has received death threat calls.

TTN:  A Cairns dairy farmer has received death threats over her petition to remove the Tablelands Regional Council (TRC). TRC has been in the news lately as a potentially major beneficiary of politically-charged infrastructure, particularly roads and additional air traffic pertaining to the questionable $8.15b Aquis development.

A CAMPAIGNER who wants the Tablelands Regional Council (TRC) sacked said she has received death threats.

Lyn O’Connor said she has had phone calls from people opposed to her actions accompanied by chainsaws revving in the background.

“I suppose you could just be running your chainsaw in the middle of the night for some reason, but I doubt it,” she said.

Mrs O’Connor met the Cairns Post with a minder in tow, but insisted she would not be intimidated.

“I’m not worried – my life insurance is paid up,” she said.

The Cairns-born, long-time Tableland resident has launched a petition aiming to have the six TRC councillors dismissed for what she says is systematic failure.

“It is an accumulation of things,” she said. “It’s not personal, I’m not taking sides, I’m not supporting any of them.”

She is asking for an administrator and advisory committee to be appointed until the next election, due in 2016.

Councillors themselves have raised concerns over the democratic processes in the TRC after de-amalgamation left it with six members and Mayor Rosa Lee Long holding the casting vote.

Mrs O’Connor said she has had threats made against her dairy farming business, too – “people telling me they will make accusations on environmental and production grounds”, she said.

Mrs O’Connor wouldn’t say how many signatures are currently on the petition, which closes on July 31, but said 1000 were gathered in the first two weeks of it being available.

There is no minimum number for the petition, but Mrs O’Connor said a good turnout is crucial to its success.

“If we have a loud enough voice, we do expect the minister (Local Government Minister David Crisafulli) to act.”

She denied accusations from Mayor Rosa Lee Long that personal ambition was a factor in her campaign.

“Over the last 20 years, I have been asked to run for council,” she said.

“I own a dairy farm and I have been involved in governance and town planning, and (have sat) on boards at the national level.

“But I don’t get up in the morning and want to be on council.”

Mrs O’Connor said she is aware of potential investors in the region who control $20 million of development funds but who have been put off becoming involved by the alleged problems within council.