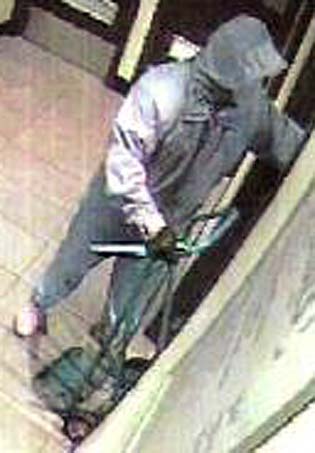 POLICE have released photographs of the knife-wielding bandit who held up Moonah’s Valern Hotel early yesterday.

The armed robber, who entered the hotel’s gaming area about 1.50am and demanded money, is described as 170-175cm tall, of medium to solid build with a husky, deep voice.

He was wearing yellow work boots, dark, possibly denim trousers and a dark blue spray jacket with a hood.

The man was holding a large carving knife in his right hand and fled the hotel carrying the stolen money in a white fabric ANZ banking bag.

The thief entered and left the building via a side entrance and ran across the car park towards Station St in New Town.

Anyone with information is asked to contact Crime Stoppers on 1800 333 000 or Glenorchy Crime and Drug Investigation Services on 6230 2881.