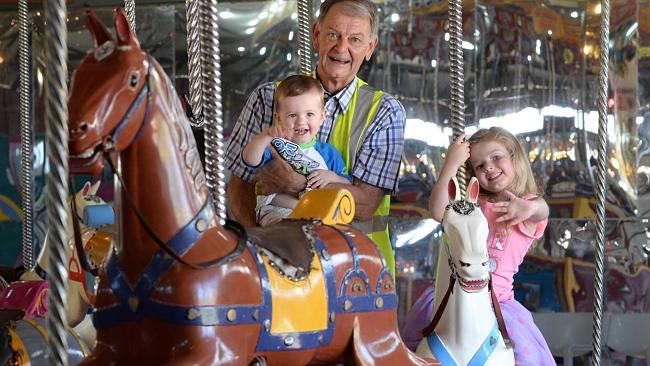 HE future of the historic Semaphore Carousel is once again secure thanks to its philanthropic new owner.

Retired businessman and mushroom farmer Frank Schirripa has purchased the 75-year-old merry-go-round and is vowing to ensure it keeps turning for many years to come on the Semaphore foreshore.

He said and his wife Jan were pleased to be able to save the local treasure.

“Any money will go to Rotary and people can get fun out of it too.”

The keys will be officially handed to the proud new owners on Sunday.

MORE: Flood of community support to save carousel

Mr Schirripa, of Grange, will sublet it to the Rotary Club of Henley Beach to raise money for local and international charities.

Vendor Brenton Leighton first put the carousel on the market in 2011 and its future has been under a cloud since with fears the carousel would be bought and dismantled with the individual hand-carved horses sold off separately.

Mr Schirripa declined to say what he paid for the carousel but it has previously been on sale for $250,000.

The land for the carousel, on the Semaphore foreshore, is leased separately from Port Adelaide Enfield Council.

Mr Masson said club members would operate the carousel, with help from members of other Rotary Clubs and outside volunteers.

“We’re looking for anyone of good reputation who is reliable who wants to get involved,” Mr Masson said.

“For the type of work that’s there it can suit all ages.”

Mr Leighton said he was happy the carousel would stay in Adelaide and continue to entertain children of the western suburbs.

“It’s going to a bloke who we feel is going to look after it very well and it’ll be good for the families,” Mr Leighton said.

Mr Leighton also runs a catering business and at 73 years old felt he no longer had the energy to do both.

His father bought the carousel in 1973.

It was built in the 1920s at Henley Beach and is believed to be the largest operating carousel in Australia, with 40 horses instead of the usual 36.

To celebrate the purchase, rides will be $2 on Sunday (March 9) instead of the regular $5.