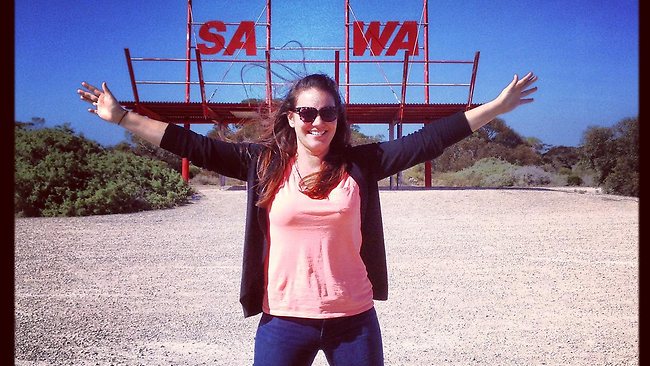 TTN: When Perth NewsLtd. journalist Yasmine Phillips was told to follow Fremantle fans to their first Grand Final in 2013, she found more than she expected travelling across the Nullabor. Yasmine profiles the trip here.

The road to somewhere: what you really need to know about driving 3500km across Australia

IT brings new meaning to the wide open road, but there is much more to the drive across Australia than simply a bitumen highway through arid shrubland.

Last week I was told to “jump in a car and get to Melbourne” for Fremantle’s historic Grand Final appearance.

The focus was supposed to be on football but, along the way, photographer Dan Wilkins and I saw a side of Australia not many get to see.

Hordes of pensioners towing caravans, backpackers in search of a great Australian adventure, truckies hauling road trains going about their daily business  it’s a transient community in the middle of the desert.

And after driving the 3500km I’m more informed on what to do next time.
So if you’re thinking of heading east across the bitumen, here are 10 things you need to know about a trip across the Nullarbor. Put the diet on hold for the week and embrace your inner trucky. The chances of eating well on your road trip east are slim to none, with healthy and light options minimal to non-existent.

We opted for an entree of deep-fried onion rings, followed by a main course of crumbed chicken schnitzel with chips and salad during our stay at the Border Village, on the South Australian side of the WA-SA border. Everywhere you stop, everyone is up for a chat.

They want to know what you’re up to and where you’re headed. And the feeling is mutual.

It was fascinating to speak to each of the people working in some of the state’s most remote locations and finding out how they ended up there.

Most were backpackers from different parts of the globe in search of an authentic Australian experience.

The tiny roadhouse community of Cocklebiddy, 273km from Eucla, sums it up best. It has a blackboard at the front that explains the township’s population  there are eight people who call Cocklebiddy home, along with 25 budgies, seven quails, one dog and more than a million kangaroos.

On the road to the Nullarbor Plain, there is a real sense of camaraderie, evident in the friendly waves from passing cars, caravans and trucks.

And then there are the flies, who tend to be even friendlier. Who needs a zoo when you can see the best of our country’s wildlife in its natural habitat?

It wasn’t long out of Kalgoorlie that we spotted an impressive group of wedge-tailed eagles feasting on a kangaroo carcass.

Snakes, bobtail lizards, a mob of emus and their chicks and a dingo were among the other animals we sighted during our five days on the road.

And most tourists who have the time to venture out to the edge of the Great Australian Bight are lucky to spot a pod of whales, too.

On the flip side, you’ve never seen road kill until you’ve driven the 3500km from Perth to Melbourne. There is a kangaroo every 100m or so, along with the odd wombat and rabbit.

For that reason, usually the only vehicles on the road after dark are trucks.

The average motorist or caravaner opts for some much-needed rest once the sun sets and the wildlife comes out, not wanting to risk hitting any. From the traveller’s chapel at Border Village to the bar in every roadhouse, the people who call the Nullarbor home have thought of everything.

Each service station comes with its own bar, restaurant and motel rooms for exhausted drivers.

The South Australian roadhouses even have pokies.

The roadhouse at Balladonia, 174km from Norseman, also doubles as a museum.

The settlement, home to one of the world’s oldest landscapes, containing seashells millions of years old, made international headlines in 1979, when space debris from NASA’s Skylab landed 40km away.

Today the roadhouse showcases some of the debris, along with a re-creation of the events and original newspaper clippings.

It also documents the history of the Royal Flying Doctor Service and early settlers, as well as the region’s indigenous history. And no trip across the Nullarbor is complete without a stop at one of the 18 holes on the world’s longest golf course, which spans 1365km from Kalgoorlie to Ceduna.

Ceduna, 500km within South Australia from the WA border, is definitely worth a night’s stay.

The tiny town famous for being one of the biggest oyster-producing regions in the country is the perfect place for some rest and relaxation.

Known as the gateway to the Nullarbor Plain, the seaside hamlet offers unrivalled views of the Eyre Peninsula and the Southern Ocean.

Stop at the Ceduna Foreshore Hotel for a well-earned beer and take in the stunning views of the town’s century-old jetty, which extends out into Murat Bay.

The landscape is the epitome of untouched, natural beauty.

And there’s its world-famous oysters? You can have them dine-in in a variety of ways or takeaway. It’s the modern-day dilemma  trying to be in two places at once.

On the road from Perth to Melbourne, travellers get the chance to do just that twice.

First, there is the border stop and quarantine checkpoint at the WA-SA border, 1472km from Perth, where passing motorists take great delight in standing astride the border.

Then there is the second border crossing where the Western Highway starts at the South Australian-Victorian border, east of Bordertown, 270km from Adelaide. The last section of the long, long drive from Adelaide to Melbourne is one of the shortest in distance, at 725km. But it will feel like the longest and could take up to 11 hours.

Much of the road is restricted to speed limits of 100km/h and there are many more towns and built-up areas.

There are a couple of sights worth stopping at, too, including the Giant Koala, at Dadswells Bridge, in Victoria.

The road trip across the Nullarbor offers many of Australia’s “big things”.

There’s also the Big Galah at Kimba, the halfway point across Australia, the Big Wombat at Scotdesco Aboriginal Community, the Big Kangaroo at the Border Village and the Big Oyster at Ceduna.

Parts of the road trip are very isolated at quieter times of the year so make sure you have adequate water supplies and a satellite phone in case of emergency.

Don’t try to rush it and get the epic drive done too quickly.

The beauty of the Nullarbor and the Great Australian Bight should be savoured.

We needed to get to Melbourne within five days. But I think a more leisurely 10 days to two weeks is better suited to this road trip.

There are plenty of cute spots to stop along the way with everything you’ll need  food, booze and chatty locals.

And the seemingly endless days of driving can be exhausting so don’t ignore any signs that you may need a break.

The sign at the Balladonia roadhouse says it all: “40 winks can save your life”. Music will be your best friend by the end of the trip. A well-planned play list could be the difference between enjoying your road trip and vowing never to drive a car for any length of time again.

My driving partner opted for Spotify, a digital music service that gives users access to millions of songs.

He was able to select the tracks he wanted to listen to and also surprise me with some of the songs he asked Spotify to choose for me.

With 35 hours on the road, there is plenty of time for deep and meaningful discussions, too. But after a few hours of that, we were glad for some music to pass the time. The Nullarbor is an Instagram addict’s paradise. From the vast treeless expanses to the rainbow-coloured sunsets, it is Mother Nature at her very best.

All you need is your smartphone and the wide open spaces to add some much-needed life to your profile on the photo-sharing app.

My favourite locations were Ceduna and the Border Village. There are many other options, just be alert to the possibilities.