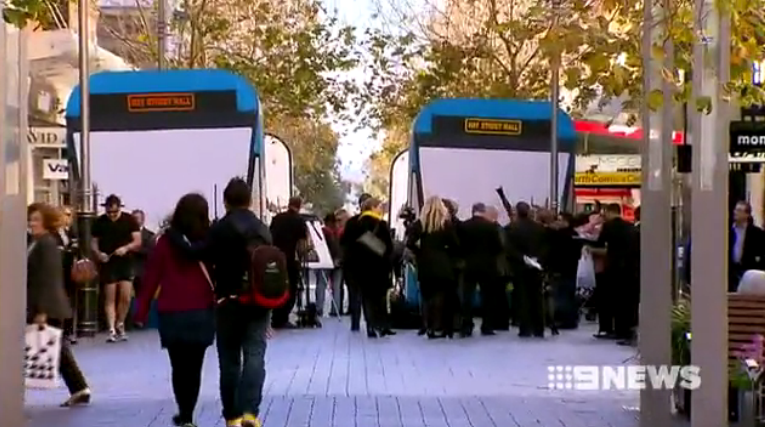 A 42-metre plywood train is sitting in Perth’s CBD, part of a council protest against government plans to run the real thing down the middle of the city’s shopping malls.

The $100,000 scale model of the dual light-rail line popped up overnight.

And in an inflammatory move, Perth Lord Mayor Lisa Scaffidi says the model will stay in place for a week to illustrate the inconvenience and potential danger of the plan.

“Once our malls are lost they are lost forever, and we want a city that is welcoming to people,” Ms Scaffidi said.

“We don’t want people to be be conscious of having to dodge trams, and we don’t want the city to lose the special unique elements that give it its character.”

The Max Light Rail scheme was one of the centrepieces of the state government’s election promises.

But funding problems have emerged, on top of the Lord Mayor’s opposition to the positioning of the CBD part of the plan.

She’d rather see it run down St Georges Terrace or William Street.

Transport Minister Troy Buswell has fiercely argued for light rail through the city’s shopping malls, saying the council is “strangling” the development of Perth.

The federal government has promised far less funding for the light rail plan than the WA government had hoped, while the coalition has refused to contribute cash to urban rail altogether.