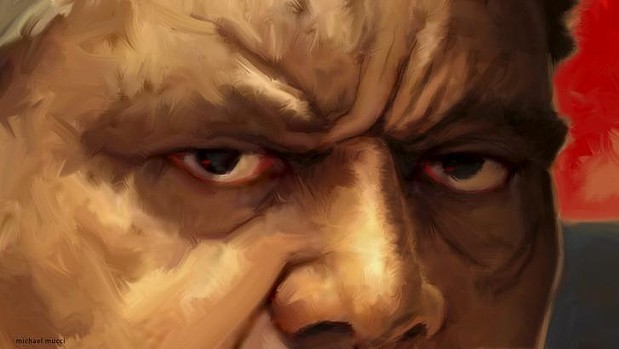 TTN: Noel Pearson – after years of being considered Australia’s pre-eminent authority on Indigenous issues – is being exposed as a bully. After a long-known reputation was kept under wraps by well-meaning journalists, the final straw has come after Pearson marched into the office of the Sydney Morning Herald and threatened a Senior Editor with violence. He also apparently ‘dropped the c-bomb’ repeatedly. Noel Pearson, previously well-regarded as an academic author and spokesperson for indigenous disadvantage, is the chairman of the Cape York Group.

An indigenous friend of The Tourism News editor said on 18th August 2014:

“The annoying thing is, is that people like him represent indig Aussies. He is the black face that white people like to see. A black educated man who ‘calls it like it is’. He has no idea what it’s like for many indig people.

“You’re right (TTN Editor commenting on importance of rising above anger) but sadly that won’t happen in my lifetime because black Australia will never unite and be one. How can we overcome disadvantage when we’re out own worst enemy. Don’t get me started on the free housing, services etc b***s***. 8/10 the funding doesn’t even reach the ground level or these ‘services’ they provide- services that set people up for failure.”

Dropping bombs and stoking feuds: the other side of Noel Pearson

Shortly after 11 am last Friday, Noel Pearson, chairman of the Cape York Group and a nationally prominent Aboriginal leader, walked into the newsroom of The Sydney Morning Herald and approached a senior editor. He proceeded to berate the editor, loudly, obscenely. He took off his jacket and told the editor he would “beat you to a pulp”. He also mentioned throwing him off the balcony. He dropped the “c” bomb repeatedly.

All in the middle of a metropolitan newsroom.

This is the other side of Noel Pearson, the unelected, unaccountable bridge-burner who has left a trail of damage and division that offsets and undermines his efforts to break the cycle of social dysfunction in many indigenous communities.

Tony Abbott is having a shocking run with his inner sanctum. He’s been putting out fires lit by his Treasurer, his Attorney-General, his Minister for Employment, his Treasurer, again, and now his personally appointed special adviser on indigenous affairs.

Abbott’s appointment of Pearson now looks well-meaning but obtuse. If Pearson were to ever appear in court in a defamation action over being called a bully, the court would be presented with voluminous evidence of his foul temper and self-indulgent rages, some of which have been recorded on tape.

One of his tirades was recorded by a former federal minister. Even after Pearson was advised he was being taped he continued a long, expletive-laden soliloquy of abuse and invective. The current Minister for Indigenous Affairs, Nigel Scullion, is also reported to have been subject to one of Pearson’s rages, repeatedly being told to “f— off”.

The trigger for Pearson’s rage on Friday was an old sore, a profile published in Good Weekend  two years ago, on August 25, 2012, by Jane Cadzow. The profile was rigorously researched and crafted, a trademark of Cadzow’s work. She has won two Walkley Awards for feature writing and been a Walkley finalist four times.

Cadzow’s request for an interview with Pearson had been turned down. Yet on the morning her profile appeared he was on the phone delivering a long blast of outrage. He was aggrieved that it had been written while he was receiving treatment for cancer and that Cadzow did not go up to Cape York when researching the story.

But Cadzow was not going to Cape York without an interview with Pearson. She also felt his rage over the phone vindicated her portrayal of his anger, based on many sources.

“His call went on so long,” she told me, “and I had so little chance to get a word in, that I even made a cup of tea … It was ironic that while he was complaining about the story his behaviour fitted exactly with the pattern I had reported.”

Her profile began with this confronting scene: The meeting began cordially enough. A Queensland government delegation was in Cairns to confer with Noel Pearson, the most influential indigenous leader in the country. Pleasantries were exchanged as people took their places around the table, then the room fell silent while everyone waited respectfully for him to speak.

What followed, according to former parliamentarian Stephen Robertson, was “a tirade of expletives and abuse”, including, more than once, the phrase “f—ing white c—s”…  starting very slowly, very deliberately, and speaking quite softly, then over the next 15 or 20 minutes reaching a crescendo”.

Among those present was state environment minister Kate Jones, whose female adviser was dismissed by Pearson as an “arse-wipe”. Robertson says his own chief-of-staff, an indigenous man, was called a “sell-out c—“. Another member of the group sums up the rest of the diatribe: “‘You f—ing white c—s’, scream, scream, scream. Full on, for half an hour. Nobody could get a word in.”

The story presented a troubling portrait of a charismatic bully who has extracted millions of dollars of funding for indigenous programs from governments and corporations, via persuasion or browbeating. The portrait of Pearson’s older brother, Gerhardt, was also troubling. The profile was balanced with the many positives for which Pearson is famous – his intellect, his lucidity and his commitment to practical improvements for Australia’s poorest communities.

I’ve interviewed Pearson, seen him speak, seen a room captivated by his eloquence, and  written in his favour. But his positives are offset by his negatives, the feuds, the disdain, the costly demands on the public purse.

And his bullying is often premeditated. Cadzow interviewed many people including a former close associate of Pearson who became an adversary, Lyndon Schneiders of the Wilderness Society. He described how Noel and Gerhardt Pearson planned their intimidation: “They called it ‘bombing’. When they were going to go in and make their views forcefully known to government, they were going on a ‘bombing raid’. I watched them do it to advisers, to backbenchers, to ministers, to journos. It wasn’t pretty.”

Even the journalist who did more than any other to push the Pearson mythology, Tony Koch, came to regret his long silence about Pearson’s dark side. In a column for The Australian in April 2012, he wrote: “Instead of drawing people into his orbit, Pearson has succeeded in pushing almost everyone away.”

This does not augur well for his role as Abbott’s emissary. Pearson’s story forms just a fractional part of the tens of billions of dollars of government funding that has been funnelled into indigenous communities and programs with little impact on measurable improvement. The public’s exasperation and cynicism is rampant. It pays the bills.

Pearson’s most recent explosion, on Friday, is emblematic of a man who cannot control his anger or curb his ego. This does not serve his cause. It also damages the cause of the Prime Minister he is supposedly helping.