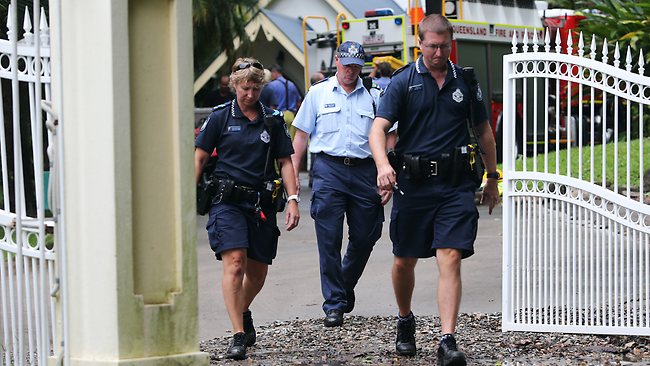 Photo: Dejected police and ambulance officers were unable to save a man after he was crushed under his truck at Cairns Tropical Zoo on Tuesday, 28th January. Under national WHS law, the man was a ‘Person Conducting a Business or Undertaking’ (PCBU) on the zoo site, Cairns Zoo management will need to prove expected hazards were avoided where possible.

From the cairnspost.com.au, 29th January

A 45-YEAR-OLD Cairns man was crushed to death at Cairns Tropical Zoo yesterday after the truck he was fixing collapsed on to him.

The man, a private contractor, was reportedly lying underneath his jacked-up dump truck fixing its drive shaft when the truck rolled, the drift shaft crushing his chest and causing extensive injuries.

Police, ambulance and fire officers and workplace health and safety officers were called to the scene at the rear of the zoo in a workshop area.

Paramedics worked on him for some time but he could not be revived and was pronounced dead at the scene.

It is understood the man was a private contractor involved in building work on the zoo site.

Police and workplace health and safety continued investigations into the afternoon, and police will prepare a report for the Coroner.

The zoo remained open during the incident, as the site was outside of areas open to the public.