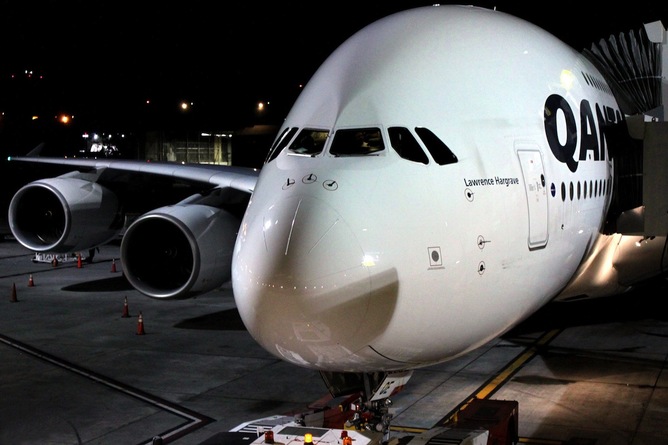 TTN: The article below is from “The Conversation” earlier this week. The Conversation is a news/commentary website that publishes a lot of articles that, whilst informative, are well-researched and often written by academics and thus not always easily digested by the reader.

Below The Conversation’s article is a piece from March 2014 by the ABC. The ABC article explores the detail and potential consequences of amendments to the act that were being considered in March, including the lift on foreign ownership restrictions that has come to pass.

The most notable part of both articles is in the ABC analysis under the subheading “Will foreign investors be attracted to Qantas?”:

“If it were totally split off, both analysts say international would struggle to find investors. Mr (Neil) Hansford says removing section 3 of the Qantas Sale Act is therefore unlikely to assist the loss-making international division at all.

“However, Mr Hansford says foreign investors are likely to invest in a separate Qantas domestic which he describes as, “one of the most attractive airline investments in the world.”

Qantas: still ‘Australian’ but struggling in a competitive market

The Qantas Sale Act amendments are set to pass the Senate this week, following a deal the government made with Labor which has consistently opposed majority foreign ownership of the “Australian” airline. For Qantas, little has changed.

Qantas has been bound by both the Air Navigation Act, 1920, and the Qantas Sale Act, 1992. The Air Navigation Act requires Australian airlines to have 51% local ownership to fly into and out of Australia. The Qantas Sale Act places more specific restrictions on foreign ownership. These restrictions have now been eased to allow a maximum of 49% foreign ownership in Qantas by a single foreign investor or airline.

Qantas may now be able to gain access to increased equity finance and this would help with funding changes required to increase the profitability of the company.

But things are still not looking good for Qantas with analysts forecasting a pre-tax full year loss of more than $700 million for the airline, on the back of a $235 million reported loss for the six months to December 2013.

Virgin has also found the going tough with a loss of A$83.7 million reported for the six months to December 2013, and some analysts forecasting a full financial year pre-tax loss of $241 million.

It is interesting to look at the change in share prices of the two companies over the longer term.

The chart above shows the outcome of an investment of A$1.00 in both Qantas and Virgin at the end of December 2003 and how this investment panned out over the period through to now. While your investment in the largest 200 Australian stocks is looking good, neither of the airlines has performed particularly well. Virgin has basically flat lined over the period from 2009 to the present and Qantas’s value has fallen over this period.

The chart above provides a similar picture for the period from January 2 through to July 15, 2014. This shows that an investment in Qantas has performed a little better than the market with the airline earning a little more than Virgin over the period. In short, while Qantas is complaining about restrictions, both Qantas and Virgin are facing difficult times.

The returns for Qantas and Virgin are fairly highly correlated as might be expected in a competitive market such as aviation.

While reading share price movements is fraught it is interesting to see the recent increase in share price of Qantas over the last couple of days. The Qantas share price has lifted 5% since news of the deal emerged, suggesting shareholders were not so unhappy with the change introduced into Parliament. On the other hand Virgin saw its share price fall by 1.2% over the same period.

There seems little good reason to retain the present restrictions on Qantas, particularly given the competition that exists between Qantas and Virgin. Rather than ask why Qantas should be allowed to take on more foreign ownership, perhaps we should be asking why there is any restriction at all. Virgin provides a good example of how the model could work if the Qantas Sale Act were repealed.

Given increased flexibility in ownership it is likely that Qantas will be looking for strategic investors to help with its restructure. Yet, it seems unlikely that Qantas will be selling off assets for now. Qantas identifies its long-term competitive advantage in terms of customer experience and the Qantas domestic dual-brand. Further, the recent losses earned by Jetstar would make it difficult to offload.

Qantas Sale Act: What impact would any change have?

Prime Minister Tony Abbott has announced plans to changes the Qantas Sale Act, giving the airline the option of restructuring its business and allowing its domestic arm to be majority foreign-owned.

Political correspondent Emma Griffiths looks at what the changes will mean if they are passed.

What does the Federal Government want to do?

Amend the Qantas Sale Act to remove foreign ownership restrictions, stipulations that it keeps the name “Qantas” and that its head office and “principal” operational centres for its planes and key services be located in Australia.

What impact could that have on jobs?

The Government wants to strip away legislation that forces Qantas to house and maintain its planes in Australia and keep catering, flight operations, training and administration facilities based here, too. That would allow Qantas to move facilities – and jobs – offshore where costs and wages are cheaper. It currently employs about 32,000 people.

However, former Qantas chief economist Tony Webber says it is unlikely the airline could shift too many of those jobs overseas: “There are additional opportunities in relation to outsourcing some of its maintenance, so there may be potential cost savings there, but they’ll be relatively trivial.”

What other limitations are there on Qantas ownership?

Will foreign investors be attracted to Qantas?

If Qantas splits off its international arm, then it could remain part of the Qantas group or be completely sold off (to a majority of Australian shareholders). Both Tony Webber and aviation analyst Neil Hansford say Qantas’s loss-making international division is not attractive to investors and that might deter them from investing in the domestic airline if international continues to be part of a bigger corporate group.

If it were totally split off, both analysts say international would struggle to find investors. Mr Hansford says removing section 3 of the Qantas Sale Act is therefore unlikely to assist the loss-making international division at all. However, Mr Hansford says foreign investors are likely to invest in a separate Qantas domestic which he describes as, “one of the most attractive airline investments in the world.”

What does Qantas say?

Show me the money. It has welcomed the move to “level the playing field” in a legislative sense, but it says it needs “immediate action” and still wants a Government debt guarantee. That would allow it to borrow funds at a much lower interest rate. But the Prime Minister has canned the idea, saying if the Government did it for one business, it would have to do it for all.

Will Parliament pass it?

Not likely. The Government has the numbers in the House of Reps, but in the Senate it needs Labor or the Greens to agree – and they won’t. When the Senate changes on July 1, the Government will still need six extra votes from a micro-party crossbench of eight. But Palmer United Party (three votes) and Senator Nick Xenophon say they won’t support the change either, so no joy there. (The re-run of the WA Senate count could change PUP’s vote count but it’s unlikely to change the situation.)

Stalemate. And a nasty row over jobs between the major parties pitting business against the unions. Both major parties see political gain in this fight. It could take a good year – if not much longer – to resolve.