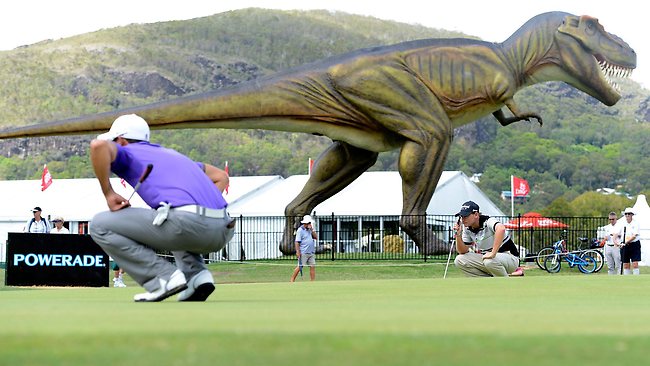 THE Sunshine Coast golf resort and dinosaur park controlled by federal politician Clive Palmer was hit with up to 90 job cuts yesterday amid community and staff concerns that the iconic destination will be shut to stem its rising financial losses.

Staff were told yesterday that the latest job losses were unavoidable but the precise number was not disclosed by management.

Insiders said that as many as 90 staff were being made redundant, leaving about 90 people still employed there, compared with more than 650 when Mr Palmer acquired the resort three years ago.

The Palmer Coolum Resort is being affected by a backlash from Sunshine Coast locals who have stopped frequenting the resort’s restaurants and golf course, while holidaying guests have issued scathing criticisms and harsh reviews on TripAdvisor. The resort, which was managed by the Hyatt and hosted the annual Australian PGA golf championship until Mr Palmer terminated their arrangements soon after buying the sprawling property near Coolum, has been suffering slumping occupancy and revenues.

Simon Stodart, who was seconded from Mr Palmer’s loss-making nickel refinery in Townsville to help run the resort, did not return calls yesterday.

Mr Palmer, who leads the Palmer United Party, did not respond to a message seeking comment.

Senior sources told The Weekend Australian that Mr Palmer’s dinosaur park, which opened late last year, and his public collection of luxury cars have failed to draw large crowds and had turned off guests who wanted a five-star experience.

In recent weeks almost every executive manager left and several subsequently described the situation as “untenable”.

Noel Mooney, president of Coolum Business and Tourism, yesterday described the resort as a “ghost town”. “It’s not looking promising for staying open,” he said. “He should give it to someone who knows how to run a resort.”

Executive and senior staff at the resort who have walked out in the past eight weeks include the resort’s head, Bill Schoch, who made an unsuccessful tilt for the federal seat of Fisher as a PUP candidate; the general manager, John Eaton; and the directors of engineering, rooms, finance, spa, and restaurants, as well as the managers of housekeeping and engineering.

The resort’s busiest recent period occurred during Mr Palmer’s hosting of an event in December for his World Leadership Alliance, of which he was made secretary-general after a large cash donation to a Spanish think tank, Club de Madrid.

Investigations by The Weekend Australian have previously highlighted serious financial problems and mounting losses in Mr Palmer’s key companies and businesses, many of which are not profitable. The owners of villas, which are part of the resort, remain embroiled in costly litigation with companies controlled by Mr Palmer, who had promised to grow jobs at the resort and improve the local economy.

A recently departed manager said: “It would be difficult for most people to believe how bizarre and ridiculous a place that we were once proud of has become.”

Another said: “It is a circus. All of the core managers and the key staff have gone.”

Mr Palmer yesterday accused China’s biggest conglomerate, CITIC Pacific, which has developed the $8 billion Sino iron ore project in the Pilbara, of “lying to the Australian public” over whether he is owed royalties from the tenements he controlled.

The dispute, which has led to numerous legal actions that are ongoing, has starved Mr Palmer and his companies of cashflow.

Insiders describe rooms at the resort running on 3 per cent occupancy while accountants and others from Mr Palmer’s company, Mineralogy, with no knowledge of hospitality, were brought in to “run around the business, scratching for savings”.

Most restaurants and bars are closed much of the time, according to visitors and staff, while some food, beverage and even basic items such as toilet paper have been unavailable. Senior sources said that edicts had been issued to ensure Mr Palmer and his son, Michael, had control over the approval of even relatively small payments to creditors and suppliers, resulting in delays.

His former security manager and bodyguard at the resort, Mike Hennessy, claimed three months ago that Mr Palmer was a tyrannical bully who had exploded with foul abuse at staff.

In late November, a French media executive had a Fawlty Towers-style row with Mr Palmer, who abused the premium guest and evicted him and his wife from their $950 a night luxury villa for complaining about a $40 steak in the Palmer Grill restaurant. Mr Palmer has strenuously denied being abusive and bullying.