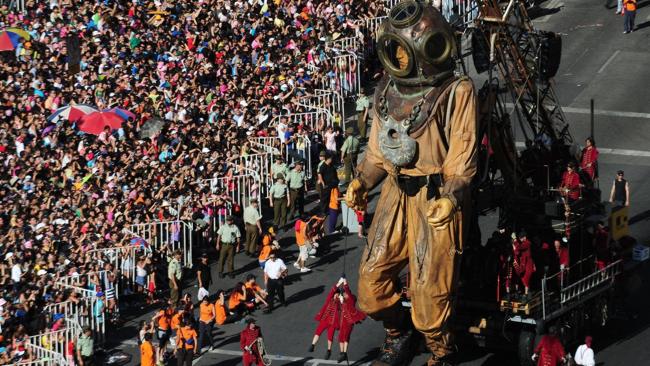 TTN 25th July 2014: : The Perth International Arts Festival has said they can’t meet the costs they incurred on bringing a show of giant marionettes to Perth. Now WA Premier Colin Barnett has struck a deal with controversial casino developer James Packer to fill the funding gap. The Giants show is purporting to be representing a little WA girl farewelling Gallipoli troops – except he’s a deep-sea diver and it’s happening in February, not in April, like every other ANZAC commemoration.

WA Government steps in to save Anzac Commemoration show The Giants

Giant puppets will roam the streets of Perth as part of an Anzac Centenary commemoration after the West Australian Government stepped in to plug a funding shortfall.

The future of the production, dubbed The Giants, was thrown into doubt after the festival’s artistic director said last month he was short $2 million of the more than $5 million needed to stage it in 2015.

But the State Government announced today they would inject $2 million to ensure the show can go on.

“The thing that got it over the line was the Premier personally brokering a relationship with the Crown Foundation,” he told 720 ABC Perth.

The production is based on the true story of a little girl – Fay Howe – from Albany’s Breaksea Lighthouse who was the last point of human contact in Australia for troops departing for Gallipoli in 1914.

She is said to have signalled to the departing fleet in morse code.

The production will be part of the Perth International Arts Festival, and put on by French street theatre company Royal de Luxe.

It will include an 11-metre-tall Deep Sea Diver and a six-metre-tall Little Girl, who will portray an uncle and niece reunited 100 years after the landing at Gallipoli.

“These giants, and particularly this young girl from the lighthouse, will help to convey those stories to current and future generations of young Australians,” he said. AN 11-metre tall Deep Sea Diver and a six metre tall Little Girl will walk the streets of Perth in February to commemorate the Anzac Centenary.

As part of the Perth International Arts Festival, French street theatre company Royal de Luxe will use The Giants to tell the true story of the little girl in Albany’s Breaksea Lighthouse who was the last human contact for many young troops departing for Gallipoli in 1914.

It will cost $5 million to bring The Giants to Perth, with the Crown Resorts Foundation donating $1 million and the State Government sinking $2 million into project.

Premier Colin Barnett said he was thrilled the State Government was able to support this project.

“I want to thank the several donors from the corporate sector, including Crown Resorts Foundation which has donated its first WA arts grant of $1 million, for their support in securing The Giants for Western Australia, which is expected to cost more than $5 million, and confirm the State Government will also provide support for the project through Lotterywest, Tourism WA and the Department of Culture and the Arts,” Mr Barnett said. “It has been nearly 100 years since the Australian Imperial Force sailed from Albany to Gallipoli to join World War I. A number of events have been planned in 2015 to commemorate this moment in history and The Giants will be one of them.

“Some may not know the significant role that Fay Howe – the little girl in the Albany lighthouse – played for the troops moored off Albany’s coast.

“She signalled to the departing fleet in morse code, becoming the last human contact the young soldiers would ever have with Australia. Weeks later, postcards began arriving from the Middle East addressed to ‘The little girl on Breaksea Island’, from the men who had hung on to that final memory of home.

“Hopefully now this story will forever be remembered as The Giants bring this tale to life.”

Royal de Luze is expected to bring more than 100 experienced performers and musicians to WA for the performance.