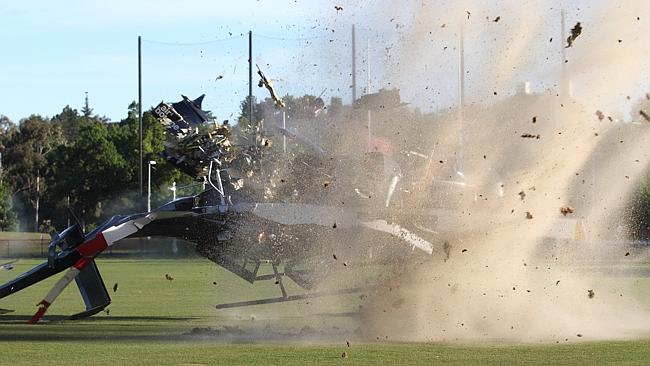 Helicopters are an ”extremely safe way to travel”, the operators of charter services maintained, as the industry prepared for its biggest day of the year in the wake of a dramatic crash and narrow escape on Saturday evening.

A helicopter carrying only its pilot, a 45-year-old woman from Mornington, crashed in an oval opposite Hisense Arena near the city. She has since been identified as Emma Bobridge, and was released from The Alfred hospital overnight.

Police said it was fortunate that the incident had happened at a time when the area was relatively unpopulated. The Australian Transport Safety Bureau yesterday launched an inquiry into the crash.

Brett Newman, the chief executive of Professional Helicopter Services, a charter service operating from Moorabbin Airport, said using helicopters to arrive at the races had been ”happening for over 25 years”.

”We ran the Melbourne Cup operation for 15 years, and it’s a safe and exciting way to go to the races,” he told Fairfax Media.

But operators acknowledge the number of commercial helicopter flights has increased in recent years – the Victoria Racing Club says about 60 a day were made to Flemington alone during the four-day carnival last year.

Mr Newman said hundreds of helicopters flew around highly populated areas every year without problems. Paramedics found the machine lying on its side among debris strewn across the oval.

The pilot sustained a grazed thumb in the incident.

Victoria Police spokeswoman Creina O’Grady said the helicopter had been ”ferrying people in and out of the race track all day from that location”.

The company contracted to fly people to the races is Heli-Serv. It did not return calls from Fairfax Media.

Ms Bobridge, 45, was released from The Alfred Hospital overnight and is recouping with her children.

Amazingly the experience pilot suffered only minor hand injuries despite the helicopter plummeting to the ground as it was taking off from the Collingwood Football Club’s Olympic Park Base.

The thunderous impact spread debris 30m and Ms Bobridge was forced to scramble out for her life.

ATSB investigators are now on scene trying to piece together how the Bell helicopter came to plummet to the ground.

They hope to speak to Ms Bobridge and other witnesses later today.

The pilot made a frantic scramble for safety after the helicopter came down while taking off.

The craft had been taking VIP racegoers to and from Flemington racecourse when she crashed just after taking off from an oval at the Collingwood Football Club’s Olympic Park base about 6.30pm.

The chopper, used to transport cashed-up punters and celebrities, plummeted to the ground in front of stunned onlookers.

Ms Bobridge had just returned to Batman Avenue in the city from Derby Day with a load of passengers.

She is believed to have been on her way to Moorabbin airport. But moments after take-off, the Bell chopper uncontrollably lurched to its side.and dramatically thundered onto the oval

The force of the impact sent part of a rotor blade through a nearby marquee and crashed into a parked car 30m away at the Westpac Centre’s rear parking lot. The rest of the helicopter rolled and smashed onto the ground, scattering fuel and debris.

Witnesses have praised the actions of a bystander who went to the pilot’s aid and helped her from the crash scene. The pilot managed to flee with only minor injuries. Picture: Michael Austin

The pilot, from Mornington, was treated by ambulance members for shock and injuries before being transferred in a stable condition to The Alfred hospital for observation.

Police were trying to make contact with the mystery helper last night.

Three fire crews arrived on the scene minutes later, extinguishing a small fire and smothering the leaked fuel with foam.

Police and fire crews were securing the site last night, while Other flights were diverted to Gosch’s Paddock nearby. Firefighters mop up a fuel spill after the crash at the Westpac Centre. Picture: Stephen Harman

“It easily could have been a fatality. Fortunately it’s a walkaway which is a good thing,” he said.

“Potentially it (the incident) could have been a big risk if there were a lot of people around. We’re very, very fortunate nothing else happened,” he said.

Sen Sgt Aleksovski said the incident would be investigated by the Australian Transport Safety board today. “I think they’ll attend (the scene) at some point and make a finding from there.”

Photographer Ewen Hill was with his daughter 15m from the crash scene and said they ran for their lives as debris flew around them.

“It really was like a movie where it was all in slow motion with the mind trying to calculate where the incoming rubbish was coming from,” Mr Hill said.

“I really feared for my daughter and my life.” “I was just on the balcony and I heard a big bang and I didn’t know what it was. It’s good to know no one was hurt,” he said.

“I quickly run down to have a look and see if everything was OK.. . . It appears emergency services have done a great job.”