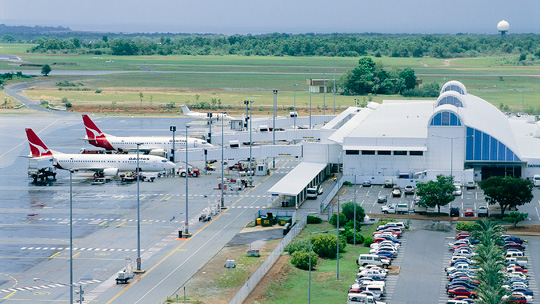 The Australian Financial Review (AFR) reports below that

Foreign airlines could fly domestic in the Top End

In the next few weeks Federal Cabinet will decide whether to proceed with a controversial proposal to open up the domestic aviation industry to foreign competition.

The proposal, which is part of the Abbott government’s plan to develop the top end of Australia, would allow foreign carriers to fly domestic passengers between domestic airports above the Tropic of Capricorn.

It follows a move last week to radically reform the Australian shipping industry, which was referred to as “WorkChoices on water” by the shadow minister for infrastructure Anthony Albanese.

The Australian Financial Review can reveal some senior ministers will push hard in Cabinet in early June to remove the ban on cabotage in northern Australia, an area that covers one million people from Broome, to the Northern Territory, Darwin, Cairns and Mackay.

There are very few examples where countries exchange cabotage rights and where they do, it is on a reciprocal, quid pro quo basis. The current proposals are unilateral. The existence of the regulation is to protect the domestic aviation locations that are barely profitable.

Meanwhile, the Transport Workers Union met over the weekend to discuss a “battle plan” that would include a campaign to stop the proposal going ahead.

TWU national secretary Tony Sheldon said if the government adopted the radical plan it would destroy hundreds, maybe thousands of jobs, and decimate the local domestic aviation industry, which has committed a fortune over the years to providing reliable and regular flights. “What are they thinking,” he said.

Sources in the aviation industry said the government had blindsided the industry with a proposal to deregulate domestic flying in the northern parts of Australia. They said the proposal had been raised over the years, including the recent review into competition policy, the Harper Review, which recommended air cabotage restrictions be removed for “specific geographic areas, such as island territories and on poorly served routes”. But they didn’t realise it was back on the agenda and ready to be discussed – and potentially ratified – as part of a policy to develop northern Australia.

The removal of cabotage restrictions on domestic routes to points above the Tropic of Capricorn would allow foreign carriers to use idle aircraft and cheap labour.

It might be cheaper, but it wouldn’t as regular. The fear is this could lead to network rationalisation by local carriers over the longer term as they struggle to compete. The upshot would be domestic aircraft withdrawing from the region to profitable trunk routes.

It might also open the floodgates for Qantas to use Jetstar Asia to fly domestically around the top end of Australia using cheap international crew, warns Sheldon. He was referring to Qantas’s subsidiary Jetstar, which was caught a few years ago using Thai cabin crew on some of its domestic routes within Australia. A senate inquiry into the industry was told crew were paid a few hundred dollars a month. A TWU parliamentary submission in 2011 said “shifts of up to 20 hours straight with no limits on duty extensions meant that these flight attendants were so exhausted they doubted whether they could react appropriately in an emergency.”

There is little doubt the industry has been caught on the back foot on the issue and is scrambling to react.

What makes it even more curious is cabotage wasn’t specifically raised in the government’s Green Paper on Developing Northern Australia. There is one mention buried on page 33 of the 95-page report: “There is limited interstate transport service across the north, meaning it is virtually impossible to fly directly within the region without stopping in cities further south. These distances also mean that aircraft have to carry significantly more fuel in case of emergencies, which reduces the amount of passengers and freight that can be transported… Some stakeholders suggest that international carriers should be permitted to move passengers between domestic airports in the north.”

If it had been given more prominence in the Green Paper, the various operators would have lodged submissions. The White Paper is expected next month or July. Whether cabotage is included in the White Paper will depend how the debate in Cabinet goes.

Supporters of a more “open skies” policy argue besides reducing ticket prices, it would stimulate tourism and help business by cutting the cost of transporting cargo. From the mining industry’s perspective it would benefit given its heavy reliance on a fly-in-fly out labour market at a time when the industry is battling to cut costs in a lower commodity price era.

Not everyone in Cabinet supports the proposal in its current form. Deputy prime minister and minister for infrastructure Warren Truss is rumoured to be sceptical of the reforms based on the havoc it would wreak on the economics of the domestic aviation market. Truss supported the reforms to coastal shipping.

Qantas and Virgin Australia declined to comment but they are understood to be lobbying behind the scenes to try and torpedo the proposal, which is expected to go to Cabinet within the next couple of weeks.

Their argument will include the amount of investment they have poured into the region, which supports many jobs. It would also change the economics of commercially marginal routes in some parts of northern Australia. They argue they have made a commitment to the region, including offering reliable and regular flights.

But the brutal reality is Virgin has the most to lose. Unlike its main rival Qantas, Virgin is mainly a domestic carrier and it doesn’t have an offshore-based subsidiary with lower labour costs that it can mobilise and redirect on the regional routes. Indeed, its key strategic shareholders, which include Etihad and Singapore Airlines, could benefit from a more deregulated domestic market.

Sources say if the exercise of cabotage rights by foreign airlines had been in prospect, Virgin probably wouldn’t have made these investments.

It sings from the same song sheet that the country’s richest person Gina Rinehart and her father Lang Hancock have been playing for decades. Lang Hancock published a manifesto Wake Up Australia in 1979 outlining how it could be done and in 2010 Rinehart and her friend Ron Manners set up a lobby group Australians for Northern Development Economic Vision (ANDEV), calling for a special economic zone with special tax and regulatory concessions.

The release of the White Paper into developing northern Australia is imminent and will include a $5 billion concessional loan facility to promote infrastructure investment such as ports, pipelines to across northern Australia.

What it will do with the aviation cabotage is still to play out, but in the meantime the domestic aviation industry, including unions, are bracing for a fight.

Cabinet will consider within the next few weeks an “open skies” policy for the Top End that would allow foreign airlines to compete against Australian airlines such as Qantas and Virgin Australia to carry passengers and freight.

It has parallels with the Abbott government’s deregulation of Australia’s shipping in coastal waters, which will allow more ships to pay foreign workers lower wage rates than their Australian counterparts.

Qantas and Virgin are fighting a rearguard action behind the scenes in Canberra against the proposal to allow foreign airlines to fly between airports in Northern Australia above the Tropic of Capricorn, which includes Cairns, Townsville, Darwin, Broome and Port Hedland.

Their fear in the longer term is that an open-door policy would apply to routes elsewhere in Australia, and allow their rivals to cherry pick the most profitable domestic air links.

Mr Albanese described the plans as “unilateral economic disarmament” that would undermine Australian wages and conditions in the country’s aviation sector and pose a threat to the local airlines.

“The consequences of it haven’t been thought through at all by the government – this is ideology before commonsense. We would be the only country in the world to do it,” he said on Monday.

“At the moment it would be opening up the northern routes, but inevitably that would move to, ‘how about we fly from Darwin to Adelaide’? The idea that Qantas would be allowed to fly domestic routes in Europe or the US is just absurd.”

Mr Albanese said the consequences could be far reaching as foreign airlines would not want to fly marginal routes and would “only be moving in to get a foothold in the major routes”.

The Transport Workers Union, which represents thousands of ground staff at airports around Australia, accused the government of “declaring war on the Australian aviation industry”.

The union’s national president, Tony Sheldon, said the plans would potentially replace tens of thousands of Australian jobs by under paid and poorly trained overseas workers.

“We will be looking at the full range of options available to us to ensure jobs and income security are protected,” he said on Monday.

The opening up of the Top End is expected to be most attractive to budget airlines such as Malaysia’s AirAsia, rather than premium carriers such as Hong Kong’s Cathay Pacific.

Trade and Investment Minister Andrew Robb said that while the matter was under consideration, there was no final proposition and the “issue is being grossly misrepresented by the unions for political reasons”.

Mr Robb and Treasurer Joe Hockey – as well as other “economic dries” within Cabinet – are understood to be the strongest supporters of the plan because they believe it would open up northern Australia to more tourism opportunities.

Mr Robb, who has tourism in his portfolio, has also been the strongest advocate in Cabinet of a push to lift restrictions on foreign airlines flying on international routes to and from Australia’s major cities, and was the architect of plans to boost the northern Australia economy when he was in opposition.

However, federal Transport Minister Warren Truss is understood to be highly sceptical of the proposal, despite him spearheading the deregulation of shipping in coastal waters.

Prime Minister Tony Abbott is also said to be “on the fence” on opening up northern air links to foreign airlines.

The Harper review on competition recently recommended removing so-called “cabotage restrictions” for passenger and cargo services to poorly served destinations and island territories, unless the benefits of the restrictions to the community outweighed the costs.

However, the Department of Infrastructure and Regional Development has said “there is little to support the panel’s simplistic view” on the benefits of lifting the cabotage rules. “It is unclear whether the relaxation of aviation cabotage would see any overseas airlines choosing to enter the Australian domestic market,” it said in a submission to the Harper review.

Independent federal MP Bob Katter, whose electorate is in far north Queensland, said on Monday that any removal of the restrictions would lead to the loss of hundreds of jobs and severely affect the ability of domestic airlines to compete with their foreign rival.

Opponents of the plan within Australia’s aviation industry fear that any trial, such as allowing a foreign airline to fly a single domestic route, would only be the start of a major shake up.

“It won’t kill the local industry overnight but it sure as hell will kill it over time. Australia is already the most liberal aviation regime in the world,” an airline executive said on Monday.

“They have already sold the farm – they now want to sell the last tools in the shed.”