Only 77% Chinese tourists satisfied with attractions 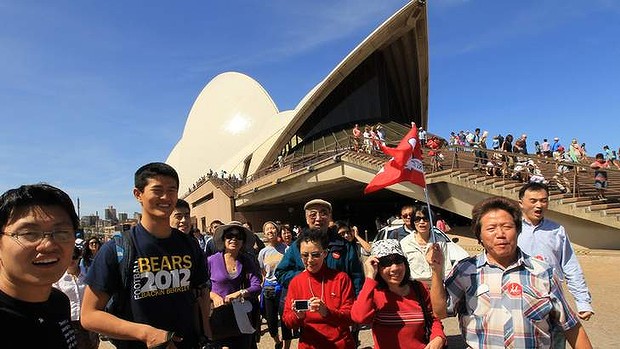 Australia has received a glowing report card from Chinese visitors, with new research showing that 90 per cent are satisfied with their holiday here.

Chinese visitors feel safe and secure in Australia, they like the friendliness of the people and they enjoy the natural attractions such as Aussie beaches, the Great Barrier Reef, wildlife and dolphin and whale watching.

But the findings released on Tuesday by Tourism Research Australia also show that satisfaction levels are lowest for shopping and for value for money.

Of the 3600 Chinese visitors interviewed for the study, 96 per cent said they were satisfied with personal safety and security, 94 per cent with the friendliness of locals, 77 per cent with attractions, 72 per cent cent with wine experience and 69 per cent with food and beverages.

But value for money only rated 57 per cent and shopping 51 per cent.

The highest dissatisfaction level was 16 per cent for shopping, while 12 per cent were dissatisfied with value for money.

The study also revealed that 80 per cent of Chinese visitors eat Chinese food here daily and that 98 per cent eat it some time during their trip.

Chinese food was rated as average by 57 per cent, high by 29 per cent and poor by 13 per cent.

Group tour visitors are among the least satisfied with the food and the report recommends that they be given more Chinese options for breakfast.

“It means the majority of Chinese visitors are likely to recommend Australia as a holiday destination to their family and friends.”

A total of 97 million Chinese tourists left the country in 2013, up 14 million from the previous year.