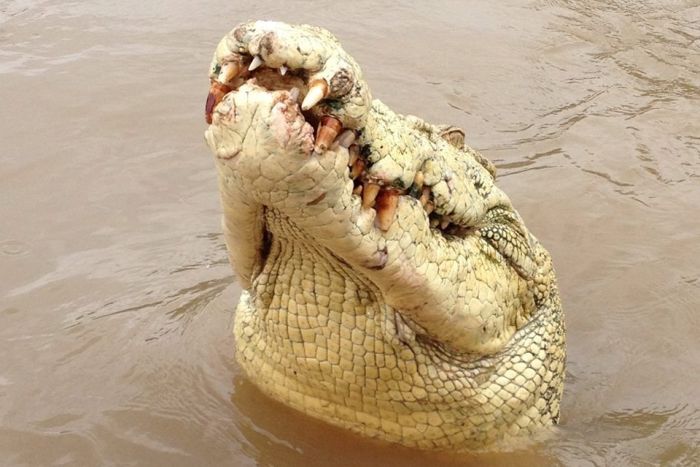 An albino-headed crocodile that killed a man fishing on a Territory river has been described by an expert as a one-in-100-million rarity.

The distinctive 4.5m saltwater crocodile – known locally as Michael Jackson – was hunted down and killed a few hours after the 57-year-old fisherman was taken when he ventured into the water to retrieve a snagged fishing line on Monday evening.

Its head was pale while the rest of its body was normal in colouring.

Crocodile researcher Dr Adam Britton said while albino crocodile hatchlings were not uncommon, for an animal to survive into adulthood was highly unusual.

“This croc’s head was hypo-melanistic, which means less melanin, causing a tendency to blonde or yellow colouring.”

Dr Britton said albino colourisation meant the animal “does not benefit from camouflage”.

“This increases the chances of being predated. Such an animal will have a low survival rate.”

Dr Britton said “Michael Jackson” had been a veteran of battles with other crocodiles over territory.

“This particular croc had lots of scars, missing limbs, a huge bite out of his flank. He’d been through the wars,” he said.

Dr Britton said that the crocodile was well known to locals, tour operators and researchers and was easy to locate.

“If you wanted to find Michael Jackson, you would find him near the bridge. We saw him four days ago,” he said.

Dr Britton said as he drove across the bridge, a travelling companion made mention of the access to the water’s edge and the apparent danger of fishing from such a location.

“We went past the spot where the attack happened… you could see the potential for [an attack],” Dr Britton said.

Pat Chappell, a tour guide on the Adelaide River, said Michael Jackson was king of that part of the waterway, which is known for its high concentration of large, saltwater crocodiles.

“He was the dominant, territorial male in that part of the river,” Mr Chappell said.

“That’s his territory and he patrols it regularly.”

Mr Chappell said a croc of that age and unique colouring was rare.

“There is one in hundred million chance of getting another crocodile like him,” he said.

“They do not have much thought process. They’re not thinkers. They’re more reactors,” he said.

“Crocodiles understand routines; if people routinely visit an area they will see that.”

He said the crocs in the Adelaide River area had learned to associated the signature sounds of certain boat motors with food – and would ignore other boats.

“You can go up ask people who’ve been fishing all day on the Adelaide and ask them how many crocodiles they’ve observed during their day, and they’ll say they’ve not seen all that many – and that’s because vessels the croc is not familiar with they treat as a threat,” he said.

Mr Chappell warned that the water’s edge was the worst place to be in croc territory.

“The fella leaning out to get his line untangled would have been right out over the surface of the water on the bank – this is where crocodiles secure their prey, that’s what they’re all about,” he said.