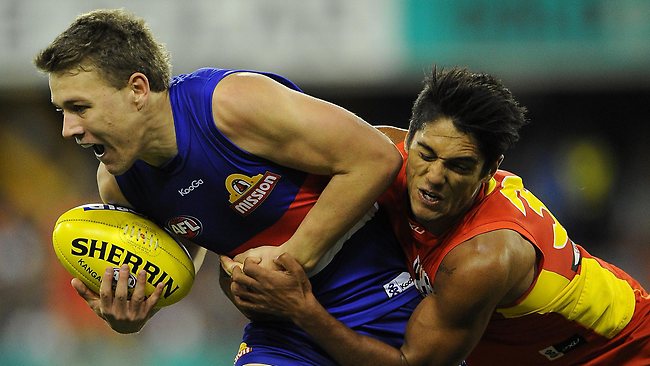 CLASH: Jack Macrae of the Bulldogs is tackled by Aaron Hall of the Suns during the round eight AFL match between the Gold Coast Suns and the Western Bulldogs at Metricon Stadium in May.

THE local economy is primed to receive an economic injection of more than $4 million when the Western Bulldogs and Gold Coast Suns meet for their AFL clash in Cairns next year.

The annual fixture, which began in 2011 when the Suns took on the Richmond Tigers at Cazalys Stadium, has tracked year-on-year growth.

According to official AFL figures, the total estimated contribution to the Cairns region for 2012 hit $3.7 million, surpassing 2011’s estimate of $3 million.

Figures for 2013’s game are still being finalised, but are expected to hit about $4 million.

AFL Cairns president Gary Young said he expected even greater economic growth and tourism spin-offs from next year’s clash, as it became a regular fixture on the sports tourism calendar.

“But this year, between TTNQ, the council and ourselves, we got out there and actively worked the market.

“The exposure and actual increase in attendance came from out-of-state visitors.”

Mr Young said the Bulldogs were as strong a football brand as the Tigers who they were replacing as opposition against the Suns in next year’s game.

“In a way, it revitalises things with a new club coming,” he said.

“We will probably engage a different lot of local or regional people … It doesn’t disenfranchise people who want to come and see a great game of footy.”