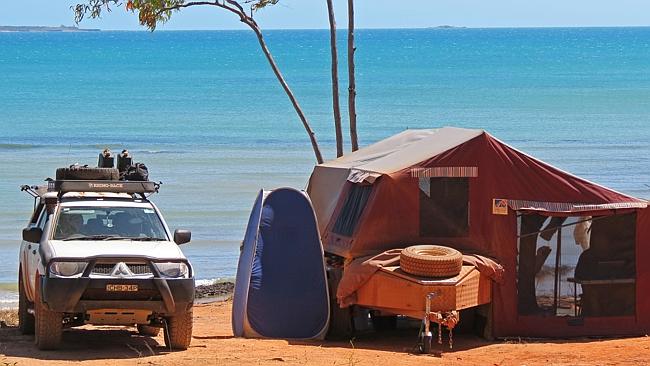 TTN: The NT News said “Writer was a guest of tourism NT”. NewsCorp do this kind of ‘native advertising’ (PR) in their news sites often. NewsCorp hold media, and therefore political influence in most of Australia’s tourism centres. These stories are effective tourism marketing in that they offer sharable online content, so locals and previous visitors to the region can say to their friends ‘Look where I’ve been’.

One of the pictures is suspiciously captioned “Sunset over the Rio Tinto refinery, which closed down in 2013, putting Gove’s future in jeopardy.” The sunsets at East Woody are a sight to behold. Photo: Chris Bartlett

MARCEL PROUST said the true paradises are the ones we have lost. I grew up in paradise — a remote paradise on the far north-eastern tip of Arnhem Land in the Northern Territory.

We kids had the freedom to roam some of the most beautiful, deserted beaches in Australia. Where a bush adventure was a short bike ride from your front door. Where “no worries, mate” was a lifestyle choice, not just some bland platitude.

The town of Nhulunbuy sprang from the red dirt of the Gove Peninsula in the early-1970s. That red dirt — bauxite — was the sole basis of the town’s existence. It was scraped from virgin bush, stuck on a conveyor belt to a refinery on the shores of Melville Bay 20km away, processed into alumina, then shipped overseas to be made into aluminium.

When I heard that mining giant Rio Tinto was going to close the refinery, threatening the town’s future, a return to that childhood paradise became an imperative.

For more than 30 years, the refinery, known locally as the plant, had been the area’s largest employer. Despite the mine staying open, the loss of more than 1000 refinery jobs has gutted the community. For a one-industry town it could still prove a fatal blow but a determined few are pinning their hopes on tourism.

They have much to be optimistic about. The Gove Peninsula is still one the most unspoilt parts of Australia. It has pristine beaches, probably the best in the country, and you have them to yourself. There are myriad opportunities for camping at waterholes. The area is unsurpassed in cultural heritage — the local Yolngu people have lived here for tens of thousands of years and there are fewer places in Australia where you can experience such thriving traditional indigenous culture. James Marika goes spearfishing with his uncle Billy Yunupingu along the shore in Yirrkala. Traditional Yolngu culture is strong in Gove Sunset over the Rio Tinto refinery, which closed down in 2013, putting Gove’s future in jeopardy. Photo: Chris Bartlett

The northeast of Arnhem Land also is blessed with the Northern Territory’s most hospitable weather. Prevailing easterlies off the Gulf of Carpentaria ensure it rarely gets as hot or humid as Darwin, 600km to the west.

Then there’s the fishing. Likely to be the best fishing you’ll encounter. Barramundi, mackerel, trevally, tuna, mudcrabs …. And it’s no exaggeration to say you only need to hurl a line into the waters around these parts and the fish come a-jumping.

I have fished the Barrier Reef, Pacific Islands, New Zealand, SA, WA and South-East Asia and never caught a thing. Nada. Nix. The most memorable thing I ever caught was my own hand — putting a hook through a finger off Norfolk Island, thus cutting short a charter which promised to reap a piscine bounty. To say I was jinxed was an understatement.

Then I went out with Brad and Kim Wilkinson, who run SS Charters, taking fishing trips out of Gove on a revamped pearling lugger, the Hama Pearl. Brad skippers tugboats for Rio Tinto, working one month on, one off. On his months off, the couple, who like many in town have young kids, devote their energies to the business, taking anglers on trips to remote parts of northeast Arnhem Land on week-long fishing adventures. Picturesque Drimmie Head, once a wartime boatplane base, now a great place to live for a lucky few. Photo: Chris Bartlett

Like most residents, they hail from “down south” but see their future in Gove, and are optimistic about its future. “Everything is here,” says Brad, as we cruise past the rocky outcrops and quiet coves of Drimmie Head. “There’s doom and gloom in town since Rio closed the plant, but we need to get behind tourism.”

Drimmie Head used to be an island which was linked to the mainland by a causeway during WW2 when the area served as a base for Catalina flying boats. Gove takes its name from William Gove, a pilot killed on a mission which took off from here in 1943. Now, a lucky few call Drimmie Head’s picturesque bays home. The famed Yunupingu clan live here and the band Yothu Yindi has a recording studio on a headland — perhaps the most remote rock band HQ on the planet.

As the Hama Pearl chugs north out past the wharves where tankers haul out Gove’s bauxite, the fish start biting. I haul in a decent-sized tuna. That’s quickly followed by a mackerel. Then another. Another tuna joins the first. Then two more mackerel. The fishing gods are smiling. But not as much as me. The author with his first-ever tuna. The first of a decent catch

Back on dry land, there is much to rediscover. Rainbow Cliffs is a popular seaside spot for a picnic about 10km from town. The beach is dominated by a towering bauxite outcrop which almost glows and can be seen clearly from miles out at sea. The beach is deserted, the only sound the gentle surf and the breeze in the trees, which is pretty much the case for every beach I visit. And like every beach, I don’t do more than dip my toes. Yep, crocodiles.

In 1979, Rainbow Cliffs was the scene of the Northern Territory’s first fatal crocodile attack in living memory when a Victorian tourist was taken by a “saltie” as he snorkelled around reefs at the foot of the cliffs. The attack shattered the illusion that the only dangerous things in Top End waters were box jellyfish, aka “stingers”. Thirty-five years on, crocodiles cast a shadow over many of Gove’s outdoor pursuits.

A lagoon across the road from Nhulunbuy’s primary school was our favourite playspace as kids. We spent hours and hours collecting tadpoles, guppies, building tree houses and exploring this tranquil spot. I wouldn’t dare do that now. When I amble down to the lagoon in the late afternoon a large sign warns me in no uncertain terms that death and dismemberment await the unwary. Still, its still waters and abundant birdlife make this a pleasant place for a stroll. Out of town, the Giddy River rock pools were one of the most popular swimming spots growing up in Gove in the 1970s. A series of connected waterholes and waterfalls, the “Giddys” are still as enticing as ever, but swimming there now comes with a warning: watch out for crocs. Same goes for several other old haunts along the nearby Latram River and at the popular East Woody beach — setting of spectacular sunsets. These signs were not around in the 1970s

But the next day, I find myself wading through the waters at Cape Wirrwawuy — scene of multiple croc sightings over the years — to join Trevor Hosie and his part-dingo pup Penny for the 60-minute boat journey across to Bremer Island. Trevor, who’s dived and fished the waters of the Top End since the 1980s, runs Banubanu Wilderness Retreat at the island’s northern tip, with his wife Helen Martin.

Banubanu is a small assortment of rustic huts and permanent tents in sand dunes, protected from elements and hardly noticeable until you are at its front door. Actually, such is the laid-back nature of Banubanu, it doesn’t have a door, per se. This is the ideal spot if you want a Robinson Crusoe experience (with somebody else doing the cooking). The day revolves around relaxing, beachcombing, swimming (box jellyfish are unknown and Trevor says he’s never seen a croc here), and more relaxation.

Trevor also takes guests on fishing charters (your catch turns up on your dinner plater later on) and visits with the Yolngu owners of the island, led by matriarch Laklak Marika, who mentors mainland youth in traditional ways and with whom Trevor and Helen have a special kinship. Another glorious, deserted beach at your disposal. This one is at Banubanu’s front door. Photo: Chris Bartlett

More traditional culture can be experienced back on the mainland at Yirrkala, the indigenous community about a half-hour drive south of Nhulunbuy.

The arts centre has an unrivalled display of works by local artists or you can join a tour with Yolngu-owned Lirrwi Tourism, and immerse yourself in the culture of the area’s traditional owners: a smoking ceremony of welcome, tribal lore and language, basket-weaving, spear fishing and gathering bush tucker.

These are unique experiences and are great selling point for the area but Nhulunbuy — forced to its knees by economic rationalism — faces many hurdles to making tourism a bigger money-spinner and potential employer. The town of Nhulunbuy. It faces a tough future

The town’s very isolation — such a drawcard in itself — makes it an expensive place to visit.

Since Qantas withdrew its daily service, only Air North serves the town. Fares are not cheap. Driving to Gove is limited to those with 4WDs and suitable gear. The town lacks a campsite. The grounds of the Walkabout Lodge are used, but space is tight.

The NT government is making the right noises. Chief Minister Adam Giles is on record as saying tourism is the way to build sustainable economic activity in the region. But, like mining itself, there is much groundwork to do.

I was privileged to grow up in this place. It deserves to be shared.

The writer was a guest of Tourism NT. One of the locals pops his head around the door

Getting there: Gove is a one-hour flight from Darwin or 90-minute flight from Cairns. Air

North is the only airline servicing the town. www.airnorth.com.au

Staying there: The Walkabout Lodge has standard double rooms from $218.

Gove Peninsula Motel has rooms from $165

http://govemotel.com/ Limited camping is also available at the Walkabout.

Banubanu cabins and tent accommodation (meals and transfers included) start at $336 per person per night. www.banubanu.com

Eating there: The Walkabout and Arnhem Club have bistros. There also are several

takeaways in Nhulunbuy. All meals are catered for on Banubanu. Camping on the beach at Rainbow Cliffs.