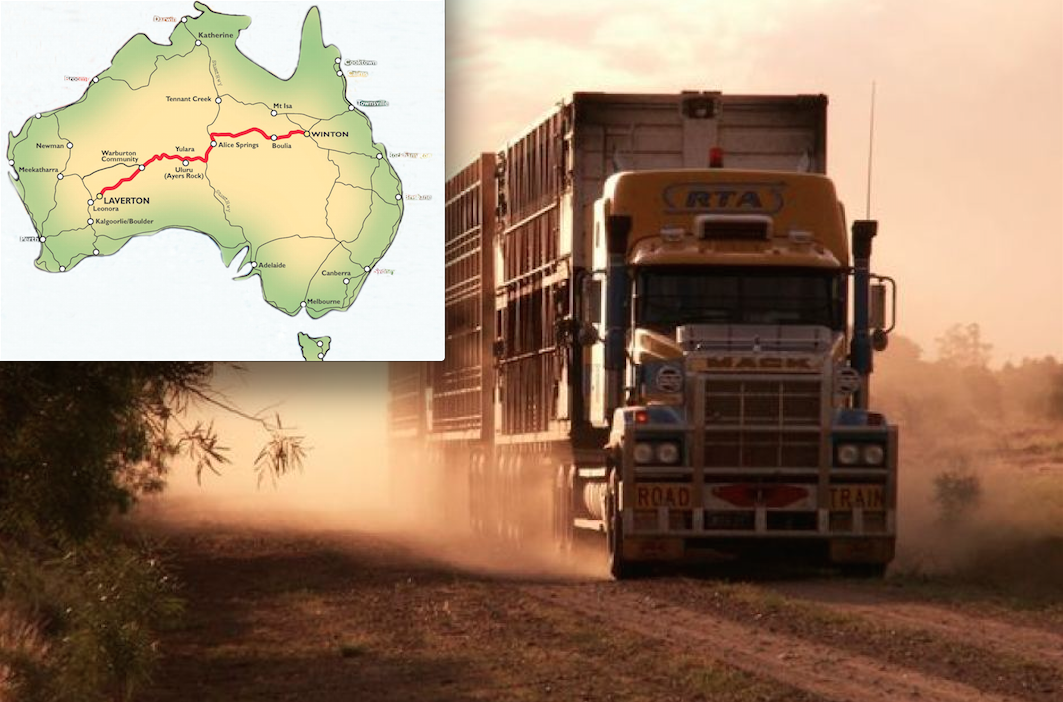 Photo: Much of the 2,800km Outback Way is currently dirt. (ABC Contribute)

Costings for a proposed national east-west road link have revealed stark differences in quoted figures for the Northern Territory, Western Australia and Queensland.

The differences equate to tens of millions of dollars when multiplied by hundreds of kilometres.

The Outback Way is a project to seal almost 1,600 kilometres of roads between Winton in Queensland and Laverton in WA.

It would cost $270 million to seal 600 kilometres of dirt road in the Territory – based on the $450,000/km figure quoted by the NT Department of Transport.

But at WA prices, upgrading the same length of road would cost $150 million.

The Laverton Shire, about 1,000 kilometres north-east of Perth, extended east through the Gibson Desert to the NT border. It includes 800km of unsealed road earmarked for the Outback Way.

NT Department of Transport chief executive Claire Gardiner-Barnes said higher construction rates in the Territory was due to a number of reasons, including:

She said roads in the NT were in a poorer state and would require more work – and therefore money – to be sealed and upgraded for the Outback Way.

“It is likely that these sections will require more substantial upgrading than other sections, particularly in terms of flood immunity,” she said.

“Therefore sections in the NT may require a substantial amount of additional earthworks, drainage works, additional pavement material etc. to bring them up to the same standard relative to other states.”

Embed: Outback Way: How much road will $1 million dollars buy?

Alice Springs Mayor Damien Ryan also said NT road works were more expensive because they were done by private contractors, while in Queensland and WA, every local government had its own road-works gang.

“In the 70s you would see the silver bullet caravans and the bloke grading,” he said. “But the road crews in the Territory were all disbanded.”

Although local governments are technically able to tender for NT Government road works, they do not have the necessary road-works equipment such as graders and water trucks.

“The bottom line is we’ll need an injection to buy equipment,” he said.

“It’d be a considerable start-up cost. It would need to be funded by the feds.

When we need gravel we have access to it. We don’t have to haul it far. Local experience can bring down the cost of any job.

“We talk about employment opportunities. This would be jobs for life.”

Mr Hill said the Laverton Shire road gang employed up to eight people – almost a third of the shire’s total number of employees.

The Mayor of Boulia Shire in Queensland, Eric Britton, said local work gangs could do the same work for less money. He said the differences in quoted figures came down to two things: drought and gravel.

“We’re lucky we have good relationships with the rural ratepayers of our shire,” he said. “When we need gravel we have access to it. We don’t have to haul it far.

“Local experience can bring down the cost of any job.

“The cost of road building in drought years will increase. It fluctuates a fair bit.”

He said dry soil required more water to make it “compound” or clump together for road building.

“The way these droughts are going, it does vary,” he said.

“If we have a good season it doesn’t take a lot of water to bring it to a sealed hardness.”

Nationals leader Warren Truss is promising to spend an extra $33 million on sealing more of an outback highway joining Queensland, the Northern Territory and Western Australia.

The 2,800 kilometre Outback Way is a series of roads and tracks between Winton in Queensland and Laverton in Western Australia, and is sometimes referred to as “Australia’s longest shortcut”.

Much of it is dirt and Mr Truss today will pledge the $33 million over three years towards sealing more of its length.

The estimated cost of completing the Outback Way is estimated to be about half a billion dollars.

The Nationals say the road link will be good for remote communities along its path.

The Coalition is putting a lot of resources into winning the Territory seat of Lingiari at this election.

Lingiari covers an area of more than 99 per cent of the Territory, and is currently held by Labor’s Warren Snowdon.

The Outback Way consists of seven interconnecting roads and highways.

It passes through the deserts of central Australia and has long been touted as a development to link Australia’s east and west coasts via the Red Centre.

The Outback Way Regional Council says it will push state and territory governments to match the Coalition commitment.

The council’s deputy chair and Alice Springs mayor Damien Ryan says it will cost more than than $600 million to seal the Outback Way.

“We will work with the Northern Territory, the Queensland and the Western Australian governments and we’ll be looking for dollar for dollar [contributions],” he said.

The Labor member for Lingiari says he won’t match the the commitment by Mr Truss.

Mr Snowdon says the federal Labor Government has committed $150 million to new road works in the Territory, and $90 million of that is to upgrade roads in Lingiari.

“I see the importance of the investments he is wanting to make, and we support the Outback highway, but it is not my absolute priority,” he said.

“Other roads are more important to me at the moment.”