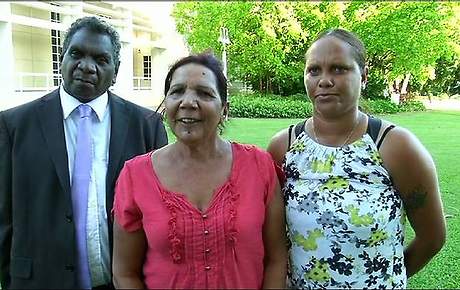 PICTURE: The Northern Territory MLAs representing some of Australia’s most remote communities have staged a walk out two weeks after the NT Tourism Minister abused Alison Anderson (photo centre). Since then things have gone from bad to non-functioning for NT Chief Minister Adam Giles.

THE Territory CLP government is in crisis after three of its Aboriginal backbenchers staged a walk out after the opening of Parliamentary proceedings, following two weeks of turmoil.

MPs Alison Anderson, Francis Xavier and Larisa Lee have denied that they are planning to leave the CLP to start a new party or to sit as independents, but have complained the voices of indigenous people are not being heard by the government.

They say the government has not kept its election promises to the bush, and are under great pressure from their electorates to deliver.

Although backroom talks have taken place over the last fortnight, it’s not known what the trio has been asking for, and Thursday’s walk-out is a sign those talks have broken down.

In the past hour, government whip Lia Finnochiaro has returned to Parliament from her honeymoon in the Maldives to ensure the government did not lose a censure motion this afternoon.

The rebel bush MLAs have left Parliament house and did not vote. The censure motion was lost 11-8.

If Ms Anderson, Ms Lee and Mr Xavier leave the CLP, it would leave them with 13 members and Labor with eight.

But, if the CLP loses the Blain by-election in two weeks it will leave them with 12 members, which is not a majority government, leaving them to form a government with the support of an independent.

If a government could not be formed, Territorians would head back to the polls.

An incident last month when Minister for Central Australia Matt Conlan allegedly told Ms Anderson to “f*** off, you c***” highlighted the division within the party.

Chief Minister Adam Giles has refused to discipline Mr Conlan over the incident, despite last week being forced to vote with the opposition on a motion to do so when he realised the three bush members were intending to cross the floor.

Mr Giles held a press conference before parliament this morning and was pressed on whether he intended to expel Ms Anderson from the party.

“I’m not looking at expelling anybody,” Mr Giles said.

“I have said publicly that I’m very happy that members of our team have the ability and the freedom to speak publicly, sure it doesn’t always look tidy.

“We’re not in negotiations, what we’re doing is setting a plan for the future of the NT.

The CLP government is arrogant and losing touch with the people, the legislative assembly’s only independent says.

The government is “absolutely” worried they could bring it down, said Gerry Wood. “When you start being arrogant, you lose the people,” he told reporters.

Mr Wood helped the previous Labor government retain power when Ms Anderson, then an ALP member, left the government in the lurch to sit as an independent before joining the CLP.

He said the trio needed to be clear about their intentions.

“They either need to be working with the CLP, or they need to get out and be independents or form their own party, but it makes it difficult for parliament to run if you have this instability,” he said.

If they were angry about broken promises in the bush, they had a committee system available for them and did not need to bring the parliament down, Mr Wood said.

“If they’re right and the government is wrong, the committee can come out and make a recommendation – there are systems for people, especially backbenchers, to use to check the government is doing the right thing.”

He said it was likely the CLP had over-promised in order to win the 2012 Territory election.

“Maybe the promises were a bit too outlandish to win the election, or they weren’t realistic, or people don’t realise these promises can’t happen overnight,” Mr Wood said.

“Maybe the CLP has itself to blame there, if they promised things they couldn’t really deliver and that won them seats. If they haven’t done what they promised, well, maybe it’s come home to roost.”

READ NT NEWS’: CLP ‘getting on with the job’ despite internal rift

In a statement today, Opposition Leader Delia Lawrie called on Chief Minister Adam Giles to “admit he has lost the ability to govern”.

“The three CLP MLAs have threatened to expose the Chief Minister on national television if their demands are not met,” Ms Lawrie said.

“The dramatic walkout and explosive new revelations show just how paralysed this CLP Government has become.

“Territorians have a right to know the rebel CLP MLAs’ demands and it’s time for Adam Giles to come clean on the negotiations.

“Anything less means the CLP is being secretive on the use of public funds to stave off a leadership change.

“Territorians have had enough. We deserve a Government that at the very least has the decency to be honest about what is truly happening.”