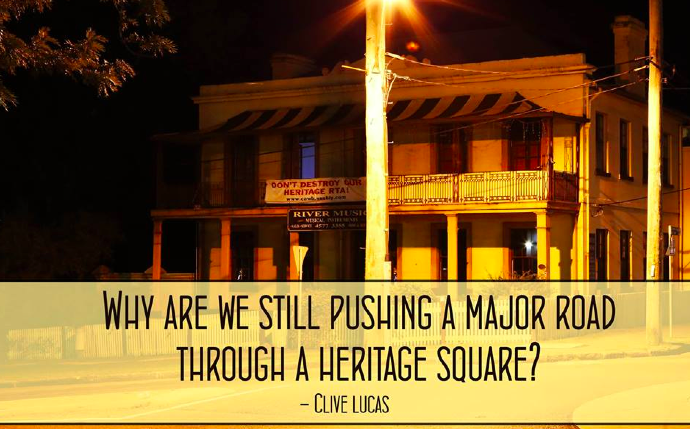 Residents of Windsor NSW are protesting the building of a new bridge that will essentially cut through arguably the town’s most significant heritage site: the town square, which was laid out by Governor Macquarie himself. Thompson Square is adjacent to The Macquarie Arms Hotel, an historic pub; the roundabout on the land in question provides access to tourism attractions like the Tebbutt Observatory and the cobblestone Windsor Mall.

The below story from the Sydney Morning Herald demonstrates that protests made by the people of Windsor, NSW are not just opposing development in principle.

Excerpt: Early drafts of the department’s report refer to ”long-term irrevocable impacts” on the heritage value of the Thompson Square conservation area ”and the heritage of Windsor”. But those references have been removed from the final version of the report.

A controversial plan to replace historic Windsor Bridge has been recommended for government approval despite internal documents revealing the proposal is problematic and open to legal challenge.

Internal emails between government MPs and ministers also reveal the department was under political pressure to recommend replacement of the bridge.

An independent engineer’s assessment recommended upgrading and strengthening the existing bridge at a cost of $14.5 million – $50 million less than the cost of building a new bridge across the Hawkesbury River.

The Department of Planning and Infrastructure on Thursday recommended the project go ahead despite its own assessment finding little justification for the project.

The project proposes demolishing and replacing Windsor Bridge and putting a new road through the Thompson Square heritage precinct, which dates back to Governor Macquarie’s time.

Early drafts of the department’s report refer to ”long-term irrevocable impacts” on the heritage value of the Thompson Square conservation area ”and the heritage of Windsor”.

But those references have been removed from the final version of the report.

Opposition heritage spokeswoman Barbara Perry said the government should not approve the project.

”There is no way minister Hazzard can approve this project in good conscience, given the strong advice from heritage, traffic and engineering experts,” she said.

”The independent advice that the government has received has been all but airbrushed on its way to Mr Hazzard’s desk … Refurbishing the existing bridge at a far cheaper cost to the taxpayer is the only option that makes sense.”

The department recommended replacing the bridge while acknowledging its legality was ”questionable”.

”The delays are killing us,” the email reads. ”Brad has put no pressure on [the department] to get it finished as you know this was [an] election commitment.”

Mr Boland-Rudder replied, saying he had spoken to the chiefs of staff for Mr Gay and Mr Hazzard ”and they are fully aware of the importance of delivering the road and that the local MPs, along with the broader community, are very supportive of the need to improve the region’s roads and at the heart of this is Windsor Bridge”.

Another email from Mr Bassett to Mr Hazzard’s office says: ”The three local members and the local Liberal councillors are being politically bashed daily by Labor/Greens groups over this project and we are committed to making the project happen as soon as possible.”

Greens MP David Shoebridge said the Department of Planning’s internal assessment suggested the new bridge should not be built.

”But, in just one month, the Department of Planning did a U-turn and went from a position of supporting modest repairs to the existing bridge to recommending the government’s preferred option of a new and costly bridge.”

In his final report, the director-general of the Department of Planning and Infrastructure, Sam Haddad, said key concerns raised in submissions about the bridge replacement proposal included heritage, traffic and the impact on the Thompson Square Conservation Area.

”The assessment acknowledges that, despite there being no direct destruction of heritage items apart from the existing bridge, the new bridge would have long-term negative impacts on Thompson Square in terms of its fabric and character,” Mr Haddad said in his report.

“The assessment also acknowledges that there would be potential adverse impacts to a lesser degree associated with the construction of the bridge on Aboriginal heritage.

“However, on balance, the department is satisfied that, despite these impacts, the Windsor Bridge replacement project is consistent with the objects of the act and is in the broader public interest, given its immediate and long-term regional and local traffic benefits.”

Mr Bassett told Fairfax Media that his job was to represent his electorate.

“And that was exactly what I was doing when making representations to the government to ensure time was not being wasted, while due process was followed, as many constituents have repeatedly asked why we had not commenced building the new bridge,” Mr Bassett said.

A spokeswoman for Mr Hazzard said a final decision was yet to be made on the project, but local members are obliged to represent matters of interest in their electorates.

“The NSW Liberals & Nationals made a commitment to replace Windsor Bridge and the government is working hard to deliver its election commitments.

“[Roads and Martime Services], after investigation and consultation with the community, put forward its preferred option – to replace the bridge.

“The [director-general Sam Haddad] has also recommended a range of strict conditions to minimise impacts on heritage and environment.”