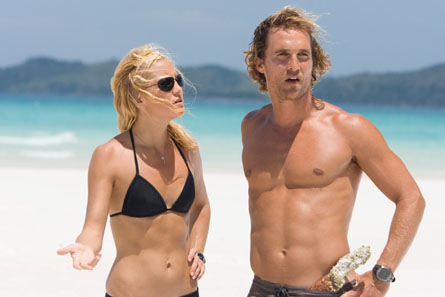 In a bid to lure more film crews to the region and build more buzz in show biz circles, Cairns Regional Council is releasing a show reel that presents our finest natural assets to location scouts and producers.

The Far North already has an enviable film and TV resume, providing the beautiful backdrop to hit television shows and films such as Fool’s Gold and the upcoming Lisa McCune medico drama Reef Doctors.

But the council reckons there’s an even brighter future for the region on the big and small screen, and is working hard to get the Far North in the spotlight.

The four-minute show reel includes endorsements from industry professionals from some of the productions that were shot around Cairns recently.

“To hear filmmakers talk about their positive experiences and to rave about the scenic locations really demonstrates just what we have to offer,” Mayor Bob Manning said.

Industry heavyweights say the Far North is not only attractive for its scenic values, but also the local infrastructure and the council’s new streamlined approach to issuing filming permits.

“There’s a good international airport right there five minutes from the city, accommodation’s great, customs is a breeze, everybody’s friendly and they all speak English,” American cinematographer Scott Ransom says on the show reel.

The council has issued on average about 40 filming permits a year over the past three years, including for the major Australian television series The Straits, which spent 10 weeks shooting at major local landmarks.

As well as promoting the region to huge international audiences, film and TV productions also bring an economic boon.

It’s estimated about $3 million flows into the local economy when a production the size of The Straits comes to town.
When Reef Doctors was being shot at Port Douglas, the visiting cast and crew booked more than 65 rooms at three local hotels, as well as taking a month-long tenancy in a local office.

The show reel cost $4000 to make and is available to view on YouTube.

“This show reel will further help us to be visible on a world stage in this highly-competitive industry,” Cr Manning said.