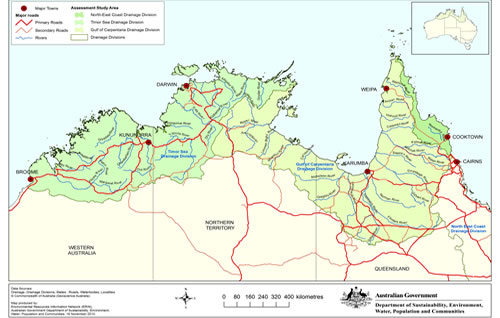 What if the tourism industry planned it right?

Apart from reference to easing visa restrictions and opening up roads to inspire the building of resorts, the federal government’s Northern Australia white paper of June 2015 has no tourism-specific plans.

The white paper does, however, have a broad ambition for tourism – to double visitation by 2035.

Such confidence in the doubling of visitation just by increasing infrastructure respresents everything that’s wrong with tourism governance in Australia – the government believes, and writes policy on the idea that ‘if we build it, they will come’. If we build the road, they will drive on it.

But what if we took what we know about what tourists really want, and used the extraordinary Northern Australia infrastructure funding opportunity to build the ultimate tourism experience? What if we made Australia the ‘World’s Island Holiday’?

The Australian Bureau of Statistics show that ‘Cultural and Heritage’ tourists spend 40% more than others.

What if the tourism industry came together and made sure all the visitation pieces fell into place by 2035?

What if we took everything that Hawaii does right in its tourism, everything that New York does right, that Paris and Niagara Falls do right with their attractions, and made a plan that didn’t just open up some roads, but gave the Asian Century tourists everything they could ever want in a holiday?

Aquaculture – generally seafood farming – has been identified as a focus of the Northern Australia white paper.

Tourism industry operators on the ground now, in 2015, have the ball in their court. Before too many plans for infrastructure are set in stone, we, the tourism industry have the opportunity to shape the New World of Tourism.

The Tourism News, with its parent company Australian Voice, will be making submissions to government across various aspects of investment as the Northern Australia white paper projects unfold.

If you would like to be involved in the initial planning stages, please email info@thetourismnews.com.au or call Veronica on 0400180001.

The below is taken directly from the Northern Australia white paper ‘Business and Trade Investment’ section.

The north can capitalise on its iconic locations, open spaces and clean environment to host millions of tourists every year. Reforms to visitor visa processing and infrastructure improvements could see annual international tourist numbers double, exceeding two million visitors a year by 2035. The Government’s aspirations for tourism and hospitality are: • development of a range of hotels and resorts across the north • lifting overseas tourist horizons beyond the wonders of the Great Barrier Reef and the Daintree Rainforest, to an expanded appreciation for Kakadu National Park, the Kimberley and Broome.

The Prime Minister has unveiled his long-awaited vision for northern Australia, releasing a wide-ranging white paper in Canberra that sets out ambitious policy ideas for the next 20 years.

New roads, studies of dam sites and changes to land-use laws formed major parts of the Government’s development blueprint, which is designed to make the north an “economic powerhouse”.

The plan included a $600 million roads package, cash to upgrade airstrips and money to explore rail freight options, in addition to the $100 million beef roads fund and $5 billion concessional loans facility that were announced in the federal budget.

A $200 million water infrastructure fund will be set up and river systems across the north will be studied to see if they can support dams, or other storage options.

Land-use laws in the north have led to long delays and cost blowouts in construction and mining projects over the past decade, so the white paper included support for native title bodies and new surveys to start simplifying land arrangements.

As the ABC revealed at the weekend, the Government has released a new investment pitch to some of the world’s biggest companies and will hold a major forum in November in Darwin, in the hope of attracting billions of dollars in cash from overseas.

A new $75 million Cooperative Research Centre on developing the north will also be set up and there are measures to boost links with the broader Asia-Pacific region.

“We will drive down the costs of operating in the north for business; making it a more attractive place to invest and work,” Tony Abbott said in a statement.

“By making the right regulations and infrastructure investments, we can encourage jobs and tackle the costs of living far from major cities”.

Some ministers were pushing for special visas to allow more skilled migrants from South-East Asia to work in northern Australia.

But MPs involved in developing the white paper described today’s announcement as “just a deposit”, with more policy measures to be put in place in the next few years.

Queensland, Western Australia and the Northern Territory governments are expected to contribute to the cost of new developments.

Federal Opposition spokesman Gary Gray was worried the white paper would be “big on vision but light on achievable measures”.

Grand northern Australian development dreams are nearly as old as the nation itself and have repeatedly failed to materialise.

But ministers said the rise of Asia meant there was now agriculture, aquaculture, renewable energy, tropical medicine and tourism markets the north of the country could service.

They believe big multi-national funds will want to invest billions in the north of the country if the Government puts the right infrastructure and laws in place.