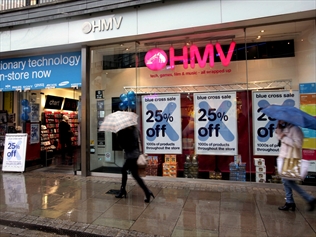 MAJOR British music retailer HMV announced on Monday that it will appoint an administrator, raising fears of more than 4,000 job losses.

Audit and consulting firm Deloitte will manage the struggling chain, the last major music retailer on the British high-street, as it seeks to attract possible buyers.

“The board regrets to announce that it has been unable to reach a position where it feels able to continue to trade outside of insolvency protection,” said a statement issued Monday.

Administration is the process whereby a troubled company calls upon independent expert financial help in an attempt to remain operational.

HMV added that the board “understand that it is the intention of the administrators, once appointed, to continue to trade whilst they seek a purchaser for the business”.
The 92-year-old institution employs around 4,350 staff, but has struggled to meet the challenge of online retailing and digital downloading and has been teetering on the brink for many months.

“The problem they have is their core product categories are disappearing, and that’s a very hard thing to fight,” said analyst Kate Calvert of Seymour Pierce brokers.

The company, which also operates in Ireland, Hong Kong and Singapore, announced in December that it was in danger of breaching bank loan arrangements, and its shares on the London Stock Exchange were suspended on Monday.

It has huge debts and last month reported sales were down 13.5 percent, leading to a crash in the share price that left the company valued at just over £5 million (six million euros, $8 million).

It launched a huge, month-long sale on Saturday offering 25 percent off a huge range of products to boost sales, but even that was not enough to keep the administrators from the door.

The first HMV store opened on London’s Oxford Street in 1921 under the ownership of the Gramophone Company, which endowed it with its legendary trademark, the image of a dog listening to a gramophone — His Master’s Voice.

It became part of music history in 1962 when Brian Epstein cut a demo for The Beatles in the shop studio, which led to the Fab Four signing with EMI, the record label that owned HMV until 1996.

It is the latest British retailer to fall into administration.

Photography chain Jessops announced last week it had called in outside help, while retail chain Comet collapsed into administration late last year and shut its doors for the last time in December.