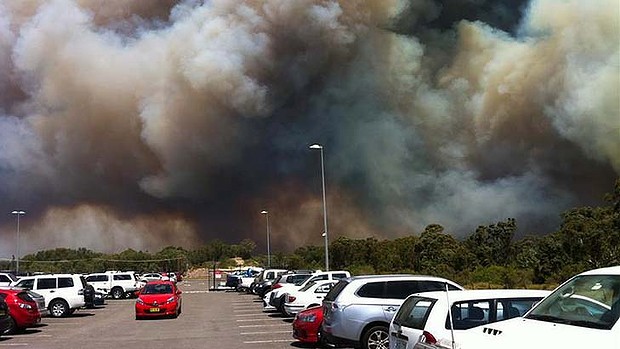 Newcastle airport has been closed and evacuated except for a skeleton staff because of a bushfire nearby.

‘‘Newcastle Airport is closed due to a bushfire in close proximity,’’ the airport said on its website on Thursday.

It will remain closed indefinitely, but may reopen on Friday, an airport spokesman told AAP.

‘‘But it just depends on what’s happening close by and changes in the wind direction.”

Nothing has been damaged at the airport but the fire is close and most staff have been sent home, he added.

The airport was closed after a fire burning near Heatherbrae breached containment lines fanned by gusty winds.

RFS spokesman Joel Kursawe said the situation there was ‘‘pretty full on’’.

The fire, burning parallel to the airport, is also threatening a service station on a main road, he said.

‘‘I know things are getting pretty hairy for them up there,’’ Mr Kursawe said.

Passengers seeking details about flights are advised to check the Newcastle Airport website for updates.

The Heatherbrae fire is burning in a south-easterly direction and crossed over Cabbage Tree Road toward Fullerton Cove.

School students who live in Williamtown and Cabbage Tree areas are being evacuated to King Park Sports Complex.