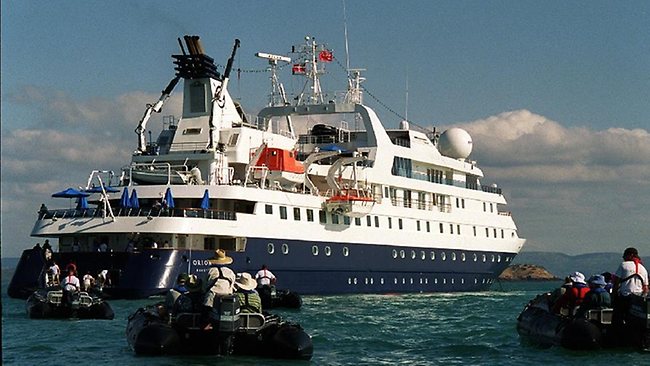 CAIRNS has been urged to embrace small expedition-style cruise ships and their big spending passengers.

Orion Expedition Cruises founder Sarina Bratton says the city is also in a prime position to become a turnaround port for the boutique category of vessels.
She told the Cruise Down Under conference at the Cairns Hilton hotel yesterday that red tape and port charges needed to be cut.
Ms Bratton said the passengers, who spent between $600 and $1400 a day, wanted special itineraries.
“They want to go where the big ships can’t,” she said.
But she said they were restricted to the same shipping corridors and anchorage points as the large cruise liners.
Ms Bratton said two-year coastal cruising exemptions needed to be extended, enshrined in legislation, and the criteria reduced because the smaller expedition vessels did not qualify under the Federal Government’s definition of a cruise ship, which is 5000 tonnes or more.
Ms Bratton said port charges were expensive with ships carrying 100-150 passengers paying $11,606 for berthing, pilotage, mooring and baggage fees in Singapore, yet were charged $52,700 in Sydney, $52,960 in Brisbane and $14,900 in Cairns.
“That’s why I love coming here (Cairns with her company’s Orion),” she said.
She said Cairns could become a turnaround port (where existing passengers left and new guests arrived) with itineraries to and from the city including Papua New Guinea, East Timor, Indonesia and West Papua.
Royal Caribbean Cruise Lines commercial development vice-president John Tercek told 150 delegates that a lack of infrastructure was hindering his company bringing their largest ships to Australia and Cairns.
Ports North chief executive officer Chris Boland said after work dredging the shipping channel and improving port facilities was finished, Royal Caribbean’s larger Voyager class liners would be able to berth at Cairns, but not until 2016 at the earliest.
Share Tweet
Previous Post Tasmania’s ‘drive market’ pitch drives huge growth
Next Post James Packer hatches his own Colombo Plan