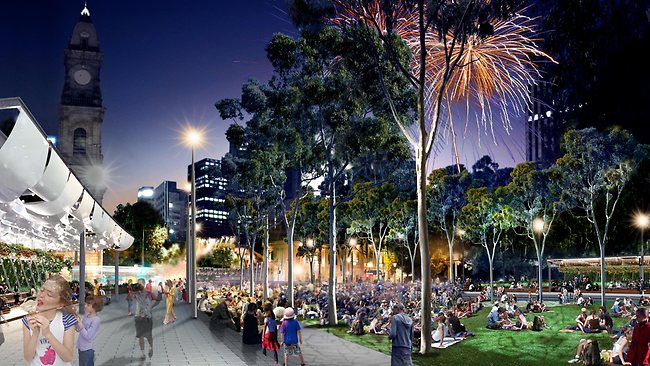 THE new event lawn and plaza at the redeveloped Victoria Square will cater for up to 10,000 people.

Today, council workers will begin work on clearing the square, including ripping up pavers, before councillors are expected to approve a building contract next week.

The Advertiser can today reveal new details of the redevelopment, which is expected to cost millions more than the budgeted $24 million because of the decision to complete the central plaza and cost of dealing with low-grade soil contamination.

The event lawn and plaza combined will have the capacity to host events for up to 10,000 people.

ALL87 new trees will be lemon-scented gums, planted at about 5m tall and growing up to 35m.THEThree Rivers fountain, to be moved to the southern end of the square, will have a larger basin, coloured LED lighting and water jets. Other lights around the square will project patterns on to the paths and lawns.THE grassed event space will slope down from the central plaza towards the northern end and be surrounded by tiered paving to a depth of 1.5m, helping to block tyre and exhaust noise.

THE play fountain will have water cascading on a series of steps and jets shooting up from the ground.

PEDESTRIAN and cycle paths will flank the central plaza, with a dedicated bus lane on the northern side.

THERE will be new toilets and power supply for pop-up cafes to plug into.

The redevelopment includes an event lawn for up to 5000 people in the northern half of the square, a paved central plaza and a raised stage, and water playground at the northern tip.

The council aims to complete the project in time for the Tour Down Under next January and then host events in the square on most weekends.

Lord Mayor Stephen Yarwood said it was “a historic day for the city and state”.

“The upgrade of Victoria Square will provide a world-class place for people to come together and connect,” he said.

Major works will begin by the end of the month.