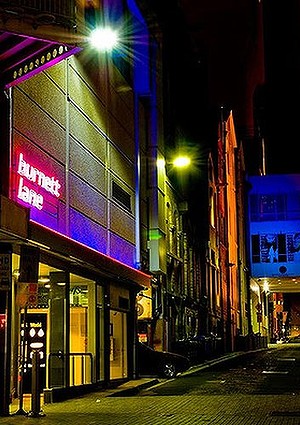 A new liquor licence category is set to push Brisbane’s laneway culture over the tipping point from wishful thinking to booming reality.

The Office of Liquor, Gaming and Racing has introduced a cafe liquor licence category which, had it existed when Brett Roland was applying for Brew’s liquor licensing, could have saved him $15,000 and months of agony.

Brew, nestled in the back of Burnett Lane, opened its doors in 2010 amid Brisbane City Council’s concerted push to establish a Melbourne-style laneway culture through its Vibrant Laneways and Hidden Spaces plan.

Mr Roland originally applied for a small bars licence which would cap the number of patrons allowed in at 60, but then decided to apply for a restaurant liquor licence to get more people through the doors.

However, in order to be eligble he had to build a kitchen at the venue.

The new category means a liquor licence can be granted to venues which serve food prepared away from the business, not necessarily in a commercial kitchen on the premises.

“It would have been much better if the cafe licence was available [at the time],” Mr Roland said on Wednesday.

“It would have saved myself $15,000 in infrastructure charges.

“I wouldn’t have had the five months of to-ing and fro-ing.”

Mr Roland said some small bars were having to pay costs of proper established restaurants, just to be able to serve alcohol.

“The reality is if I want to stay open past 7 o’clock in the city, who wants a meal in Brisbane after 7pm?” he said.

“We’re not Melbourne, we’re not Sydney but I still have to keep my 20 square metre commercial kitchen open until an hour before I close.

He said his Paddington venture Urban Grind had been granted a cafe licence and now he could “just keep my snacks around and continue to operate”.

Matthew Jones, from Managing Director of Liquor and Gaming Specialists, said the new licence could potentially lead to more boutique bars, with emerging bars applying for a cafe liquor licence instead of the restaurant or small bar options.

“For a long, long time, people have been over this antiquated idea that a meal is something you eat with a knife and fork at a table,” he said.

“There’s plenty of other ways of eating these days which don’t really fit in with the outdated legislation.”

Mr Jones said there was also potential for cafes in suburban locations which would not usually be eligible for a liquor licence to be approved for one.