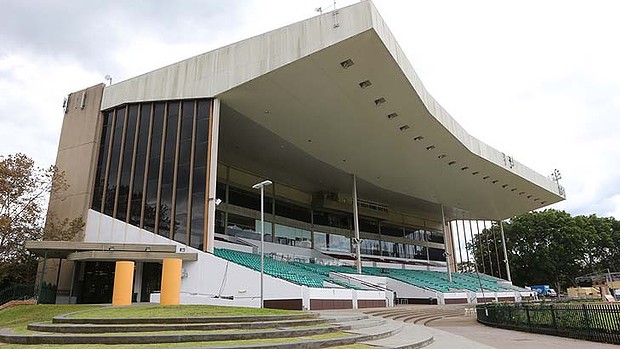 Plans to sell the Wentworth Park greyhound racetrack at Glebe to build up to 700 apartments are ”ludicrous” says a government-appointed member of the board that manages the land.

New details have emerged over the difficult lease negotiations between the site’s trust and Greyhound Racing NSW, which had been seeking to remain at the prime inner-city location for another 40 years.

Wentworth Park Sporting Complex Trust board member Robert McKeown said he was ”gobsmacked” by a proposal involving Greyhound Racing NSW, revealed by Fairfax Media at the weekend, to sell the dog track and build a billion-dollar residential complex. The site is on Crown land.

Panthers Leagues Club and developer Brookfield Multiplex are also linked to the plan, which would fund a sports stadium in western Sydney and a greyhound and harness racing facility at Eastern Creek.

”It’s ludicrous. It just came out of left field and I can’t for the life of me see how it could possibly happen,” said Mr McKeown, a retired solicitor who has lived in Glebe for 40 years. ”The idea of alienating public open space … for private residential and commercial purposes is just ridiculous.”

The site is also used by schools, universities, sporting groups and community events.

The greyhound racing lease at Wentworth Park expires in 2027 and Greyhound Racing NSW has been negotiating a new lease to run until at least 2054. But it has also been exploring the prospect of moving to Eastern Creek.

Greyhound Racing NSW chief executive Brent Hogan said the industry had a legal right to operate from Wentworth Park and “if we were to be moved, we’d have to be in line for some significant compensation, including a new site”.

He said lease negotiations with the trust had been “hard … in terms of reaching an arrangement which is sustainable for the racing industry”.

”In that context, it is not only sensible but predictable that bodies like us would be looking at … the alternatives if we can’t reach an arrangement at Wentworth Park,” Mr Hogan said.

The trust’s chairman, Percy Allan, said after more than six months of talks, the parties were yet to agree on how much Greyhound Racing NSW would pay in rent and upkeep. About $6 million in major works is required on the facility.

”We need a … minimum income in order to survive as a trust,” he said. ”[Greyhound racing] generates a lot of income there, they maintain the facility.”

Mr Allan claimed the chances of residential apartments being built at the site was ”zilch … there would be massive community outrage”.

The City of Sydney controls the land around the racetrack. Lord mayor Clover Moore said the council had not been consulted on the plan, which is expected to be submitted to the government as an unsolicited proposal within weeks.

A spokesman for Deputy Premier Andrew Stoner, the minister responsible for Crown lands, said the government has ”no plans” to sell the Wentworth Park site.

Vision needed: “There might be a stronger argument to improve Wentworth Park as a public space, to better integrate it with the infrastructure that is already there.” Photo: Brendan Esposito

Largely swampland, Wentworth Park hung heavy for much of the 19th century with the stench of nearby abattoirs and fat-rendering plants.

To live near it in adjoining suburbs Pyrmont and Glebe meant exposure to heightened rates of typhoid. Open sewage drains to the Glebe foreshore exacerbated the public health problems.

“I have, within the last few weeks, driven over the said swamp and seen the mouth of the said sewer,” a doctor wrote in the Herald in 1875, “and the stench almost overcame me.”

Within a few years, however, the park area – a green wedge between Sydney’s Broadway, Ultimo and Glebe – was transformed. It was infilled with harbour silt and subjected to a significant beautification project in the 1880s.

The Herald was so impressed it described the park as “the most attractive and beautiful of our recreation grounds, second only to the Botanic Gardens”.

Nobody would describe it in such terms any more.

The park, which represents a significant open expanse in a part of the city that does not have a huge amount of open land, is now more accurately described as three parks tacked together.

On the southern side, there are some playing fields and equipment, which suffer from their exposure to the heavy traffic along Wattle Street.

In the middle, there is the Wentworth Park greyhound track and grandstand, where often the bookmakers look like they’re struggling to keep interested.

And there are public playing fields on the northern side. These also suffer from their exposure to traffic but they are at least large enough to be used as training grounds for sporting clubs.

In contrast with the strips of parkland that have been built along the foreshore in Glebe, all three Wentworth Park “parks” do not fulfil their promise. They are poorly landscaped. They do not flow into one another.

The Herald believes, therefore, that there is merit in at least considering what can be done to improve the public land at Wentworth Park.

Just because greyhound races have been run there since the Depression does not necessarily mean they should continue to be run there indefinitely.

Alternatives are at least worth discussing, particularly if it means better integrating the three chunks of parkland.

But on what basis should the future use of Wentworth Park be determined?

This question emerges after the Herald’s revelation on Saturday that a consortium led by Panthers Group and Brookfield Multiplex want to redevelop the area to fund stadia in Sydney’s west as part of an “unsolicited proposal” to be put to the O’Farrell government.

At least on the face of it, there is some merit in the logic of the proposal.

If greyhound racing is not that popular in Glebe, which it does not appear to be, it makes intuitive sense to use Wentworth Park facilities to fund new stadia at Eastern Creek, Penrith or Liverpool.

Sydney needs to spread its points of interest across the whole geography of the city. This would be a benefit of the Panthers/Multiplex scheme.

But the proposal would also require the development of new apartment blocks on the existing Wentworth Park site.

And the process of urban consolidation is invariably one that throws up contradictions that need to be carefully managed.

But, at the same time, to complement those developments, the city needs to retain and enhance its open and public spaces and community services.

In other words, there could be an argument for apartment developments on parts of Wentworth Park.

But there might be a stronger argument to improve Wentworth Park as a public space, to better integrate it with the infrastructure that is already there and to make the overall precinct a more attractive place to live.

Doing so – making Wentworth Park a better park ­– might actually help the process of urban consolidation more than rushing to put up another 15-storey block.

And the people who are uniquely ill-suited to balancing these arguments are the ones who would benefit from the development – the unsolicited proposers.

This is a problem in general with the O’Farrell government’s entire unsolicited proposals process. And it is a problem, in particular, with Wentworth Park.

If nothing else, the secrecy needs to be wound back. The parkland is a public space and any development proposal needs to be open for the public to discuss and consider.

The New York property owners who resented and opposed the development of Central Park in the 1850s ended up making a lot of money from the park’s eventual boost to land values.

For their own sake, and ours, developers should not be allowed to set the agenda. If Wentworth Park is to be once again transformed, the transformation needs to be transparently driven by the public interest.