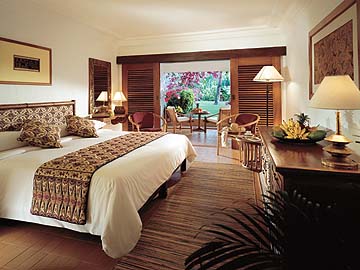 The 65-year-old man was discovered in his room at the Bali Hyatt hotel in the popular holiday area of Sanur yesterday by a cleaner and a security officer.

Denpasar Police detective Andhika Fitransyah confirmed the man, named as Igor Janco, had head injuries including bruising to his face.

“The victim was found naked, laying with face down on the bed. Around him we found some blood,” Mr Fitransyah said.

“We also found an empty wine bottle, a wallet with rupiah and Australian dollar and iPhone recharger in the bathroom.”

The man’s body has been taken to Denpasar’s Sanglah Hospital.

It is understood Mr Janco checked into the hotel on February 1.

Metro TV in Bali reported that police don’t believe there are suspicious circumstances, saying Mr Janco may have fallen and hit his head.

A spokeswoman for the Department of Foreign Affairs and Trade confirmed the death of the Australian man.

The man’s death comes just over a month after Brisbane woman Dennielle “Denni” North died in mysterious circumstances in a Bali villa.