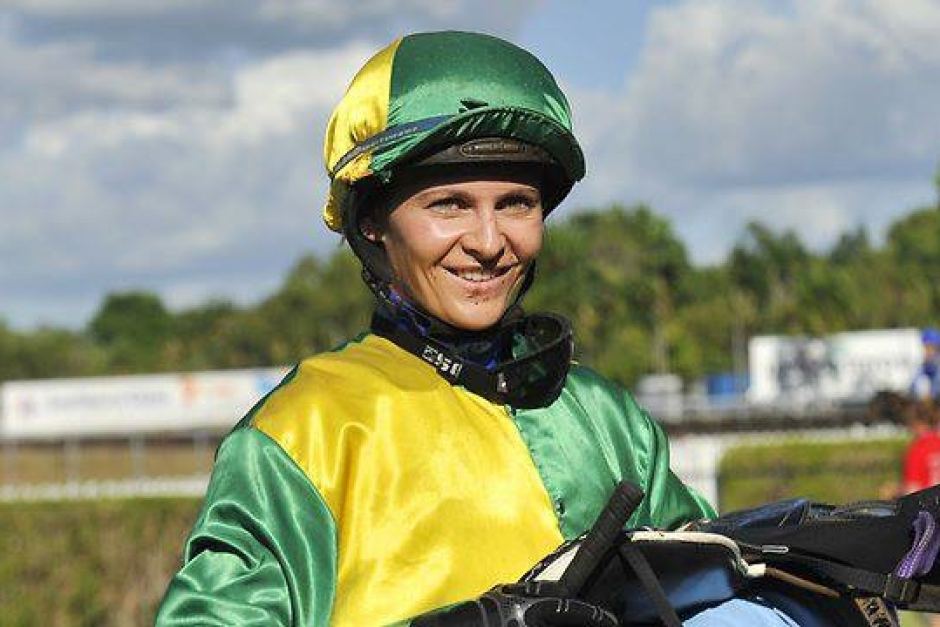 PHOTO: Tragic loss: Simone Montgomerie was the leading female jockey in the Territory last season and rated fourth in the NT Jockeys Premiership.

TTN: The NT coroner has found that deceased jockey Simone Montgomerie’s horse Riahgrande had an ‘extreme and unusual’ reaction. Montgomerie’s horse was spooked by a pedestrian crossing that was located too-near the finish line prior to Race 6 on Darwin Cup Day 2013.

It is well known across  horseracing industries that differences in track textures are most dangerous near a finish line, when horses are tired and most easily spooked.

The inquest into the death of NT jockey Simone Montgomerie has found her mount’s spooked reaction to a change in texture on the track was unexpected, despite the CEO of Australian Racing saying it was “very well known” crossings were an issue.

NT coroner Greg Cavenagh today handed down his findings in the death of Simone Montgomerie, who was thrown from her mount Riahgrand after it reared with 200 metres to go in race six on Darwin Cup Day last year.

Mr Cavanagh said the Australian Racing Board (ARB) should inform authorities nationwide that crossings that allow people to walk across the track should be avoided late in a race.

Most race courses in Australia have crossings further away from the finish line.

“I intend to make a recommendation to the ARB that it puts in place a written protocol advising PRA’s [Principal Racing Authorities] in each state and territory that crossings should be avoided in the final stages of a race,” Mr Cavenagh said.

The death of Ms Montgomerie sent shock waves around the racing fraternity, with many of her colleagues, peers and the general public mourning her death.

After her fall at the race meet, jockeys at the track met with officials and the rest of the day’s racing was abandoned, including the main race, the Darwin Cup.

Mr Cavenagh said Ms Montgomerie’s mount had an extreme and unusual reaction to the pedestrian crossing that was at that time positioned around 200 metres before the finishing line.

The track at Darwin’s Fannie Bay is sand and oil base which under foot traffic compresses and takes on a different texture, making it visible from afar, a fact noted by Mr Cavenagh after viewing video evidence from the race meeting.

Although Riahgrand had trained at the Darwin Race track, Mr Cavenagh said the horse had never raced in Darwin before 5 August 2013.

“Since the crossing is only marked out on race day, the first time Riahgrand would have seen it would have been in race six, when he was out in front, ridden by Ms Montgomerie,” Mr Cavenagh said.

He said said although horses had been known to baulk or shy at crossings, “this reaction from the horse was very exceptional and unexpected”.

Mr Cavenagh said although he could not completely discount the possibility that another factor was responsible for the baulking and stopping action of the horse, he was “comfortably satisfied on the balance of probabilities that it was the crossing”.

Despite evidence from other jockeys of similar experiences with horses reacting to the crossing, the coroner said he commended Darwin Turf Club for what he called its “proactive decision” to remove the crossing 200 metres before the the finish line after Ms Montgomerie’s accident.

In a report written by four stewards after the tragedy, the accident was found to most likely have occurred because “Riahgrand … which was leading at the time sighted the slightly different texture on the track where the public cross the track”.

The inquest heard evidence of the measures taken by officials to minimise the visibility of the crossing, including dragging the track each day after track work to give the track an overall consistent appearance, the use of a rotorvator and other methods.

Kevin Ring, from the National Occupational Health and Safety Officer for the Australian Jockey’s Association, had inspected the track in July 2013 and had “no concerns”.

But Riahgrand’s trainer Gary Clarke told the inquest he thought that particular crossing was in the “worst point in the race”.

“It’s on the home stretch and at that point horses can be starting to get tired. Also the horse will be running very hard and it’s the worst point in the race when a horse might change its stride or try to jump something because of the fatigue and speed.”

Peter McGauran, the chief executive of the Australian Racing Board, gave evidence that there was “no question” in his mind that the crossing had been the cause of Riahgrand’s reaction.

“For a start it’s too much of a coincidence to believe that at that point the horse would react and, secondly, it’s very well known that crossings are an issue that causes horses to change stride,” he said.

“Thirdly, every jockey will tell you that have steadied their horse if they can think of it with all the hustle and bustle of a race as they go across some crossing.”

Mr McGauran said that he knew of only two tracks in Australia where the crossing was towards the finishing line and had reiterated the view that they should not be positioned there.

Walsh had himself been on horses that had baulked at crossings at Darwin.

In an email Mr Walsh sent to Thoroughbred Racing NT, he wrote the crossing at the 200 metre mark had created “quite a rise, a bit like a speed bump about one metre wide right across the track and a rise of about six inches”.

No criticism of track officials over death

Mr Cavenagh said given the “bizarre circumstances” of Montgomerie’s death and the lengths that had been taken to ensure the crossing was maintained before 2013, he was not critical it was not moved to another place on the track beforehand.

“I accept without hesitation that Ms Montgomerie’s death has been devastating for the close-knit racing community in the Territory and those who gave evidence before me have approached this inquest in a spirit of cooperation that speaks to their genuine concern for Ms Montgomerie and her family and the desire to learn from this tragedy to ensure there is no repeat.”

He said he could find no evidence that that there had been any related breach of legislative provisions, nor of the policies, procedures and guidelines that exist to regulate racing at the local and national level.

Mr Cavenagh said Simone was highly respected, much loved and a rising star in the world of horse racing.

“She grew up in a family who loved and trained horses and from a very young age she adopted that as her passion.”

The coroner noted that between him finalising the inquest and today’s handing down of the findings, two female jockeys had died in falls during races.

In a joint statement released today, the Darwin Turf Club and Thoroughbred Racing NT said they cooperated and assisted in the inquest “to the best of their ability”.

“Both Thoroughbred Racing NT and Darwin Turf Club acknowledge, and accept, the thorough and painstaking work by all associated with the coronial inquiry and place on record their appreciation of the opportunity to be involved in this process,” the statement said.

“Both organisations regard integrity and safety as the most critical components of the Industry and our ongoing commitment to safety is of the highest priority.”

Both organisations said they were engaged in efforts to replace the existing crossings with underpasses.