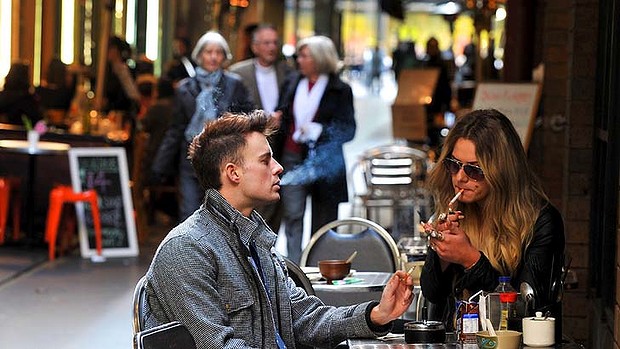 An alfresco smoking ban is likely to be rolled out in a CBD laneway by October as part of a planned wider crackdown on smoking in outdoor drinking and dining areas in the city.

A day after new figures revealed regular smoker numbers had dipped to just 13 per cent of the population in Victoria, momentum is growing for the outdoor drinking and dining smoking ban.

Melbourne City Council is expected to vote next month on trialling the ban in the The Causeway lane between Little Collins and Bourke streets from October to March.

”We will be looking very closely at the outcomes of the trial but from my own perspective it is with a view to extending the trial into other similar areas,” Melbourne City councillor Richard Foster said. ”I think it is a very important health initiative.”

Cr Foster said he was confident businesses could benefit.

”When the vast majority of the population doesn’t smoke, we are looking for places where we can enjoy a coffee or enjoy a meal without being inhibited by second-hand cigarette smoke,” he said.

”The smoke wafts … it is really a bad habit,” she said. ”I think we have to think of everyone.”

Owners of the laneway’s Local Birds coffee shop Narelle Ryan and Sally Twist welcomed the move. ”It is inevitable, it is going to happen … why not be the first?” Ms Ryan said.

Ms Twist said they had both worked in the hospitality industry for years and remembered concerns about indoor smoking bans that turned out to be unfounded.

But not all were positive about the trial. Smokers Riley Sto and Chase Smith said they often visited the laneway at lunchtime. ”If you can’t smoke you shouldn’t be allowed to drink alcohol, that is an addiction also,” Ms Sto said.

She said she loved smoking and enjoyed coming to the laneway. They said they would smoke on the corner of the laneway when the ban was introduced.

Health Minister David Davis said the government was considering smoking bans in outdoor drinking and dining areas after the next round of bans that will end smoking at children’s playgrounds, skate parks and sporting facilities across Victoria by the end of the year.

Quit Victoria executive director Fiona Sharkie, said Victoria was being left behind, with alfresco smoking bans introduced or announced in other states.

Ms Sharkie said 70 per cent of the public supported the smoking bans in outdoor drinking and dining areas.

”The sooner we can protect everybody from the harms of second-hand smoke when they are eating outdoors the better,” she said.

Baw Baw council is believed to be the only area in Victoria to have introduced outdoor smoking bans.

Steven Wojtkiw from the Victorian Employers Chamber of Commerce and Industry said it was important any trial was developed in close consultation with local traders.

”At face value the ban would seem to be aimed at improving diner experience and general amenity from a health point of view,” he said.

There should be regular assessment and feedback during the trial to ensure the ban ”can be adjusted accordingly if need be”.