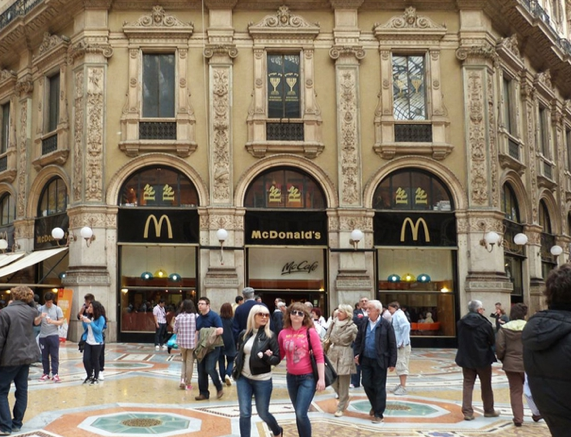 McDonald’s has sued the city of Milan for 24 million euros ($A30.5 million) in damages over being kicked out of a tourist-packed shopping arcade, the Galleria Vittorio Emanuele II, after the US fastfood chain had rented the space for 20 years.

A second Prada store will replace McDonald’s in the 19th-century marble-floored shopping mall as a result of a public tender whose terms McDonald’s called “unfair.”

To celebrate the last days of one of its busiest restaurants in Italy, McDonald’s offered free burgers, fries and drinks to over 5000 people from noon to 4pm on Tuesday.

“We wanted to say goodbye to the Galleria with a smile,” said Paolo Mereghetti, head of communication at McDonald’s in Italy

Losing the spot in the Galleria, which links the city’s historic Duomo cathedral to La Scala Opera house and is close to the chic Montenapoleone shopping street, would cause a 6 million euro loss in missed annual sales, said Mereghetti.

“No jobs will be lost as a result,” he said.

In a show of affection, 1500 people left messages on a Facebook page set up in early October to comment on the closure.

“I will miss it because from now on I can no longer eat my favourite Miami fries admiring the spectacular Vittorio Emanuele arcade,” Catia Fiorentino wrote on the website.