Mayor justifies $26m pool with a need for chlorine 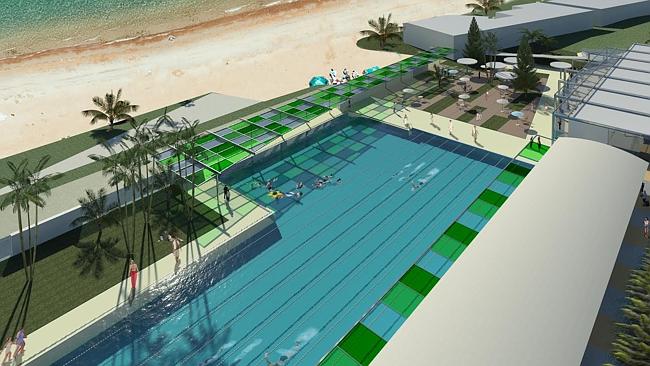 TTN: Stirling Council in WA is seeking $10m from the Federal government for a $26m ‘beach pool’ on prime waterfront in Scarborough, Western Australia.

Scarborough has made headlines as residents continue to battle high-rise developments being built on the waterfront.

An artist’s impression of the planned ocean pool at Scarborough. Image: City of Stirling

A $26 million beach pool will open at Scarborough beach in 2017, the City of Stirling has announced.

The beach-side 50 metre pool will be located south of the amphitheatre and the current surf club.

The City of Stirling has committed $13 million to the project, which Premier Colin Barnett revealed to The Sunday Times in October.

The City is applying for a $10 million grant from the Federal Government and $3 million from WA’s Department of Sport and Recreation. The announcement of the Scarborough Beach pool comes on the same day an academic slammed the WA Government’s shark policy, saying it was based on the Hollywood blockbuster Jaws.

Construction is expected to start late next year and completed by late 2017.

The City is investigating the potential for geothermal energy to heat the open air pool, which will be open all year.

Swimmers will pay a yet to be determined fee to use the pool, which will overlook the Indian Ocean. The reason why: A great white shark cruising off Scarborough and Trigg earlier this year. Picture: Surf Life Saving WA

Stirling mayor Giovanni Italiano was confident some swimmers would pay to swim in a pool rather than in the ocean just a stone’s throw away.

“If people are worried about not wanting to swim in the water for obvious reasons they have got the opportunity to be down at the beach, at Scarborough on the beach, they can sit on the beach and go for a swim,” he said. Asked if the pool project was providing an alternative option for people worried about sharks, he replied: “It could be, yes. Sharks is not something I was going to talk about as it’s not my domain.”

The potential for a seawater ocean pool was ruled out after feasibility studies.

The Metropolitan Redevelopment Authority is expected to announce a master plan for the rejuvenation of Scarborough beach later this month.

The basics of online marketing are easier than you think - learn how here. It's a small thing, but one

Victorian businesses are at the end of their tether, with the Vic. Premier unwilling to give a standard hotspotting