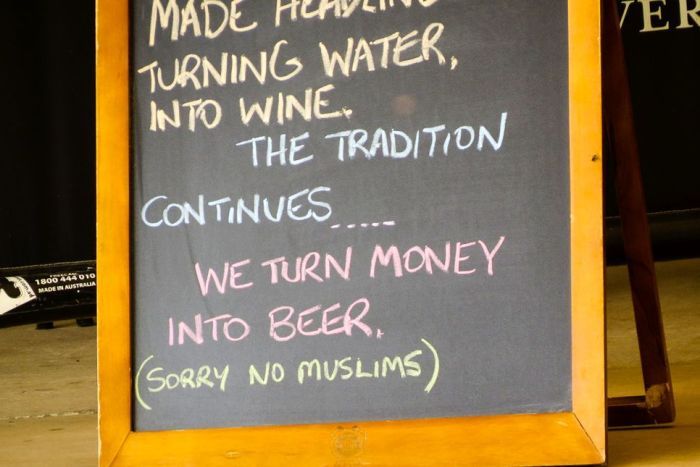 The mayor of a Queensland town where a restaurant attracted controversy by displaying a sign saying “sorry no Muslims” has described the incident as unfortunate.

An image of the sign, displayed outside Longreach’s Eagle’s Nest Bar and Grill, was posted to the restaurant’s Facebook page last Friday.

“Just a bit surprised to see the sign up ‘Sorry No Muslims’ … what’s that about???” the author of the post, Helen Day, wrote.

The line was written at the bottom of the sign, which also read: “2000 years ago Jesus Christ made headlines turning water into wine … the tradition continues …We turn money into beer (Sorry No Muslims).”

The post sparked mixed reactions on the restaurant’s Facebook page, with users divided between praise and condemnation.

Owner of the restaurant John Hawkes said the sign was up for a total of nine hours.

“Over the past 24 hours, my business and now my home has received more than 200 phone calls,” Mr Hawkes said.

“While the great majority are in support of free speech and are of patriotic sentiment, we have fielded too many abusive and threatening calls. For this I apologise to my family.

“I sincerely hope I don’t end up sanitising my every thought to the robotic degree that is evident in commercial life around us.

“I did not encourage or envisage the social media response to this sign, but the story, if there is one, is in the reaction, not the action.”

Longreach mayor Joe Owens said he believed the sign was something the majority of people in town did not support.

“Longreach is a town that I believe welcomes all races and all religions,” he said.

“It’s a very unfortunate thing that has come out from one individual.”