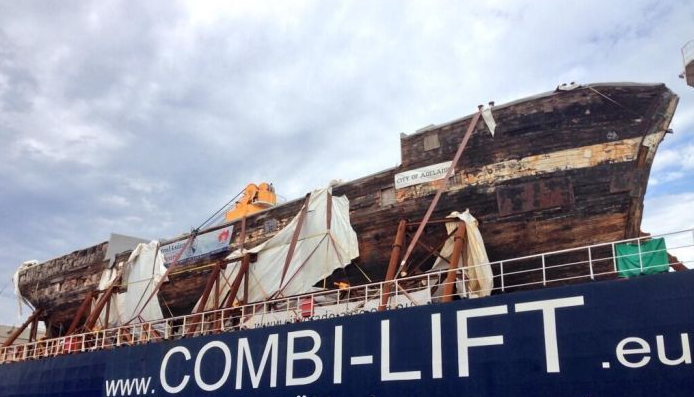 A crowd has watched the arrival of the hull of the clipper City of Adelaide at Outer Harbor, marking the end of a voyage to South Australia from Scotland.

Supporters of the restoration project have spent 14 years campaigning and organising for the hull’s return to Australia.

It has been transported about 22,000 kilometres on a barge, then a heavy-lift cargo ship, since it left the northern hemisphere last September.

The clipper was built in 1864 to transport migrants to Australia and made 23 return voyages.

The hull passed the crowd lining the shipping channel at Outer Harbor on its way to temporary berth at nearby Port Adelaide.

Peter Christopher, from the trust involved with the restoration effort, welcomed the arrival of the hull.

“It’s absolutely terrific after a long campaign to see a successful conclusion and to finally see the City of Adelaide back in the city of Adelaide,” he said.

“We never gave up, we always believed it was going to happen.

“It’d be fair to say there’s been some long and difficult times in between.”

The trust says stringent quarantine measures were needed to allow the timber hull to be moved to Australia.

It is estimated about 250,000 people are descendants of those who made the voyages to Australia in the clipper’s heyday.

This information was uploaded to their site well before arrival of the ship reported February 2014.

See details on cityofadelaide.org.au about the project and the group that got the clipper back from Scotland.

Our Vision is to …

Our Mission is to save the historic clipper ship City of Adelaide and preserve the ship for future generations, by …