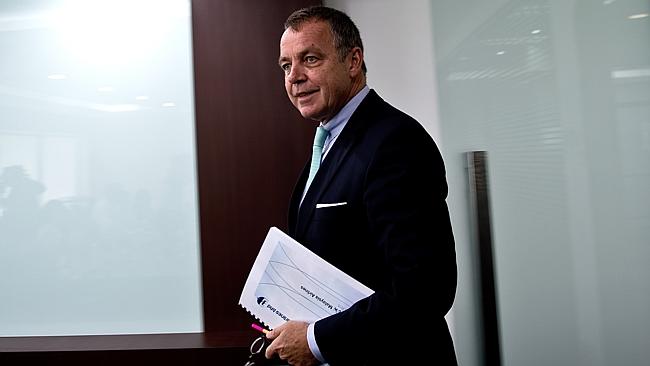 See bottom for The Tourism News press release on this subject.

Mueller (pictured) won’t let semantics get in the way of a good re-brand – he’s employing the classic ‘pile on shit this year to recover next year’ corporate technique.

In 2015, Malaysia Airlines are slashing 40% of its workforce. Things can only get better in 2016, and Mueller will stand ready to take the credit.

We at The Tourism News just hope nobody else dies as no finger of blame has been pointed at the airline or its Malaysian Government parent.

Malaysia Airlines’ new boss has confirmed he will restructure routes and slash jobs as a part of a “hard reset’’ of the airline that aims to cut costs by 20 per cent.

In a restructure likened to US Chapter 11 bankruptcy, the airline has offered jobs to just 14,000 of its 20,000 staff, and will sell buildings, shed some planes, reduce the size of aircraft on some routes and cut frequencies on others.

But new chief executive Christoph Mueller said last night he did not expect changes to the Australian route network. “This is under construction but the Australian market is of such importance to us and to Malaysia, I do not expect major changes there,’’ he said.

He estimated that, subject to external factors such as fuel prices and currency, the plan would result in the airline breaking even in 2018.

Malaysia will remain a full-­service international operator, and continue its regional and domestic operations, but will seek alliances and partnerships with other airlines on some long-haul routes.

The airline embarked on the restructure last year, when the Malaysian government announced it would be delisted as part of the $460 million full ­takeover by state-run Khazanah Nasional Berhad.

Last month, an administrator was appointed to oversee the transfer of assets and liabilities from the existing company to a new vehicle, Malaysia Airlines Berhad.

Mr Mueller plans to rebrand the airline to overcome the stigma of last year’s tragedies, but it is not yet clear whether it will be renamed.

Noting that repeated news of the search for MH370 continually reminded the travelling public of the tragedy, he could not say whether this would involve a change to the name, symbol or colour scheme “or whether we just try to really get the idea that we are a new airline in whatever shape and form’’.

“All constellations are thinkable and we will test that very diligently with test groups because we have to achieve the perception of a completely new start in certain markets where our brand is particularly tarnished,’’ he said.

Mr Mueller, 52, was behind the restructure of Ireland’s Aer Lingus and a revamp at German carrier Lufthansa. His extensive experience in the aviation industry also includes senior roles at TUI ­Travel, Daimler Benz Aerospace, the Sabena Group and DHL.

However, there is no shortage of sceptics on the question of whether he can resurrect Malaysia after years of mismanagement and last year’s damaging aircraft losses.

“You can’t parachute in someone irrespective of how sterling his previous record shows and expect him to do a job with an airline that’s been abused for two decades,’’ Endau Analytics analyst Shukor Yusof told The Malaysian Insider.
Reader comments on this site are moderated before publication to promote lively and civil debate. We encourage your comments but submitting one does not guarantee publication. We publish hundreds of comments daily, and if a comment is rejected it is likely because it does not meet with our comment guidelines, which you can read here. No correspondence will be entered into if a comment is declined.

Malaysia Airlines “The FIFA of the skies”

Malaysian Airlines’ new CEO called the airline ‘technically bankrupt’ even though the airline has not declared itself bankrupt under Malaysian, Australian or any other nation’s law.

“It is irresponsible for a CEO to use a word like bankrupt’, said Veronica Hope from Australian Voice.

“And after the MH17 and MH370 disasters, Malaysia Airlines have not been held to account.”

“Malaysia Airlines do not practice anywhere near Australian safety standards. The MH17 and MH370 disasters proved that they are reportable to no-one, and now the CEO, by crying bankruptcy as an excuse to sack 40% of the airline’s workforce, has proven Malaysia Airlines aren’t at international business and reporting standards, either.

The Australian reported on 2nd June 2015 that Christoph Mueller would slash 40% of the airline’s workforce as part of a restructure.

“The tourism industry think it’s only fair that, in the same way that state governments contract hotel room suppliers, Australian governments should commit to booking Australian-owned airlines where ticket prices are comparable.

“Any airline safety official will tell you that most accidents are preventable”, Ms Hope said.

“MH17 and MH370 were not properly tracked, and search and recovery procedures were not followed.

“Malaysia Airlines’ standards are not acceptable for Australian consumers, and the government should not be spending tax payer’s money on flights for public servants that are potentially unsafe.

“Australian-owned airlines are at a competitive disadvantage because we pay top Australian wages to ensure all safety boxes are ticked.

“All we’re asking for is a level playing field.

“Malaysia Airlines is owned by the Malaysian Government, which is not insolvent, so the airline can pay its debts.

“No conclusions have been drawn yet about the circumstances surrounding MH17 and MH370 disasters. Unlike a public or Australian company, Malaysian Airlines have not been held to account.

“Now the new CEO of Malaysia Airlines is slashing 40% of its workforce and blaming the MH17 and MH370 disasters.

“All the Australian government can do is show them we expect a higher standard.”