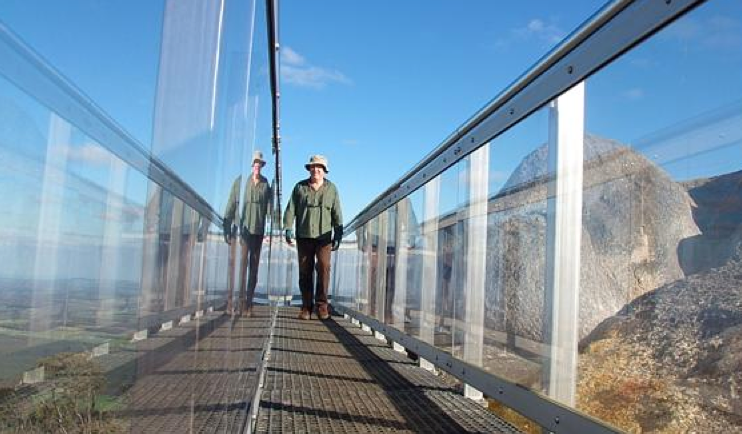 TTN: Tourism WA are doing a major mainstream media campaign offering free entry into national parks on an upcoming long weekend. See the popular campaign, in which News Limited details all WA’s best national parks (with the help of a Tourism WA employee) below.

DON’T leave yourself short during the WA Day long weekend.

From hiking past a ghost house in a national park to spotting whales off the South-West coast – Tourism WA says there are still plenty of mini-breaks available for next weekend.

Its destination expert Michelle Kosonen said a short flight could take you to places such as the Karijini National Park in the Pilbara.

And with the WA Government announcing last week that entry to WA’s national parks would be free over the WA Day long weekend, getting back to nature is even more appealing.

There are about 100 national parks in WA and 30 of them – like Karijini – usually charge a $12-a-car entry fee for a day visit. Don’t forget to capture your national park moment with a photo and enter it in The Sunday Times and PerthNow’s Parks for People competition. Parks for People: Chris Tate’s photo of Castle Rock in the Porongurup National Park near Albany shows the adventurous side of WA’s National Parks. Source: PerthNow

Just send us your favourite photo of a WA national or marine park to be in the running for prizes, including a trip to Purnululu World Heritage Park or a “glamping” adventure at Warren National Park.

Two winning entries will be chosen each week.

This week’s winner was Zoe Fletcher with her picture of her husband fishing at Lucky Bay in Cape Le Grande National Park near Esperance.

Runner up was Chris Tate with his picture of abseilers descending a granite cliff in the Porogurups National Park near Albany.

A short flight from Perth to Paraburdoo or Newman will get you close to the ancient gorges, waterfalls and freshwater swimming pools of the Karijini National Park. Stay at the Karinjini Eco Retreat – at a campsite or in one of the luxury eco tents.

Get there: Accomodation is still available over the long weekend, as are flights with Qantas.

The Margaret River region is a perennial favourite for long weekends away, but June is particularly special.

The annual whale watching season kicks off next weekend and there are several tour operators offering journeys out to spot Humpback and Southern Right whales as the mammals begin to arrive in the warmer waters of Flinders Bay from Antarctica to breed and give birth.

For more information visit margaretriver.com. While it’s set to be one of the busiest weekends in the area for winter, accommodation is still available. The Munda Biddi Trail is fast becoming one of the best off-road cycling routes in the world. The name means path through the forest in the Noongar Aboriginal language. If the weather allows, cycle through the forests and bushland along the 1000km track.

Get there: From Perth, hop on the train to Mundaring then get on your bike. Camping shelters are provided for free for those wanting to stay out overnight.

Albany is the gateway to WA’s Great Southern region. Premium wine and fresh food producers can be found dotted across the region from the Porongurups to Frankland, Mount Barker and Denmark. The area also has beautiful beaches and a dramatic coastline. Visit Greens Pool or work up an appetite hiking WA’s highest peak, Bluff Knoll, in the Stirling Range. Fill your picnic basket at the Saturday morning Albany Farmers’ market. Or check out some of the local history – King George Sound near Albany was the first European settlement in WA.

Get there: If you don’t feel like the drive, Virgin has flights to Albany (one hour, 15 mins) and there’s still a range of accommodation available for the long weekend. Further from home is Exmouth, a gateway to the World Heritage listed Ningaloo Reef. Swim with the world’s largest fish, the whale shark, which visits the area each year from mid March until July.

Get there: Flights with Virgin and Qantas from Perth to Exmouth are available over the long weekend, as is accommodation. Those on a budget could try Exmouth Cape Holiday Parks or for an indulgent weekend check into Novotel Ningaloo.

Broome is just a two and a half-hour flight from Perth.

Spend the long weekend on its famed Cable Beach or by the pool at one of the town’s resorts.

While it’s been sweater weather in Perth, in Broome the temperature has been hovering around a balmy 30 degrees Celsius.

Get there: Flights with Qantas and Virgin are still available for the long weekend. Hotels such as The Pearl of Cable Beach, Pinctada and Mantra Frangipani also had special deals. Tasting your way around WA’s oldest wine region doesn’t have to break the bank.

Many of the wineries and producers in the Swan Valley offer free samples of their best delicacies from wine to beer, cheese, chocolate, ice cream and olives.

The Swan Valley Wine Trail is a 32km scenic drive trail taking in more than 150 attractions from wineries to breweries, restaurants, cafes, distilleries and craft markets. Many of the wineries and breweries have children’s play areas and there are a number of wildlife parks.

Get there: Drive up for the day. A range of accommodation is also available over the long weekend.

Here’s a little known fact: Lucky Bay at Esperance is WA’s whitest beach. Against that backdrop, kangaroos catch the winter sun on the beach or drink from some of the freshwater pools.

Grab a coffee from beachfront barista station Lucky Bean and take a day trip to Woody Island. The 140 islands of the Recherche Archipelago off Esperance are a haven for divers and include ship wrecks such as the Sanko Harvest and the Lapwing.

Get there: Esperance is a bit of a drive, but Virgin also offers direct flights. There is a good range of accommodation still available over the long weekend.

There’s more to Kalgoorlie than just two up. Play a round of golf at the Nullarbor Links, the start of the world’s longest golf course.

Or drive out to one of the biggest outdoor galleries on earth — the 51 steel sculptures on the salt lake of Lake Ballard.

Consider hiring a 4WD and drive the Golden Quest Discovery Trail which will take you to the ghost town and museum of Gwalia where you can visit and stay at Hoover House, home to Herbert Hoover, the former US president, during his time as general manager of the Sons of Gwalia mine in the early 1900s.

Get there: Flights with Virgin and Qantas, from Perth to Kalgoorlie, are available, as is accommodation at Kalgoorlie.

Holiday on a budget? Base yourself at home but spend the days hiking — weather allowing — on the many walk trails in areas surrounding the city. Yanchep National Park has a variety of hiking trails from short walks (one to two hours) to day walks and even overnight hikes. The Ghosthouse Walk Trail (4.5 hours return), for example, will take you past the historic remains of the park’s Ghosthouse. It starts at the Wetlands Walk Trail and ends at Cabaret Cave. You can collect the trail maps at the park’s visitors centre which is open from 9am to 4pm. Don’t forget to let the centre know your intended route before setting off.