Locals in favour of airport expansion? They do exist 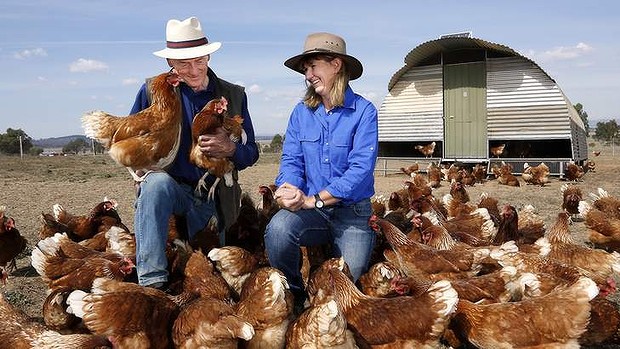 From the Canberra Times

In the rising noise and dust stirring up on Canberra’s eastern edge from roadworks and airport expansion, there’s a place for everyone.

That includes Nick Weber, his partner Anne McGrath and their free-range chooks.

Compact, curious and companionable, all 1800 high-line brown hens are thriving under a flight path at Majura, even though a new highway is being developed through the middle of the farm.

Mr Weber said the flight path would protect the rural lease from becoming a residential suburb.

”We hope in the fullness of time to be rather like that little boy at Narita Airport [in Japan], who closes the runway to take his tractor into his rice paddy,” he said.

”They respect farmers,” says Ms McGrath. ”That is part of their culture.”

That’s the cultural shift the couple and other landholders who belong to Majura Valley Landcare are seeking.

Their eggs are sold to restaurants, retailers and customers who pull up outside their farm gate at Majura House. One Sunday, for example, a Kambah woman was there at first light asking for six dozen eggs.

Others leave notes: ”I only had $5 and I’ll catch up next week.”

As the Majura parkway route takes shape through their property, which has been reduced from 52 to 46 hectares, Mr Weber and Ms McGrath are pushing to replace the uncertainty of short-term tenure with a 99-year lease to secure finance to develop their property.

Ms McGrath said even security over the house block, where an 1825 homestead stands, would be helpful.

”Even looking after the soil, planting more trees, generally when you have ownership or some sort of tenure, you are always going to take more care,” she said.

This is already apparent along Majura Road, where 99-year lease holders have developed a truffle farm and winery with flourishing oak trees and grape vines, while the short-term landholders have the barest of improvements.

Majura Valley Landcare Group president Sherry McArdle English said they were hoping to stage a national competition for a master plan to encourage town planners and architects to look at the valley’s potential and present several concepts.

Mr Weber said on the ACT’s southern approach a rubbish dump and industrial sheds were disgusting, and that lack of permanency detracted from the eastern approach.

Given a longer lease, Majura House would venture into milking sheep to complement their egg production.

For now the chooks are the centre of attention, sheltering in sheds of recycled iron and scratching about in the sunlight on half-hectare plots.

Each plot has two sheds where chooks are locked overnight. In the morning, hens from one shed run over to the other shed, passing other chooks on the way to their shed – for a sticky beak at where their neighbours slept.

The ritual happens every day, while their owners are pushing for an agricultural valley where they can share their way of life on the land with tourists and people from town.