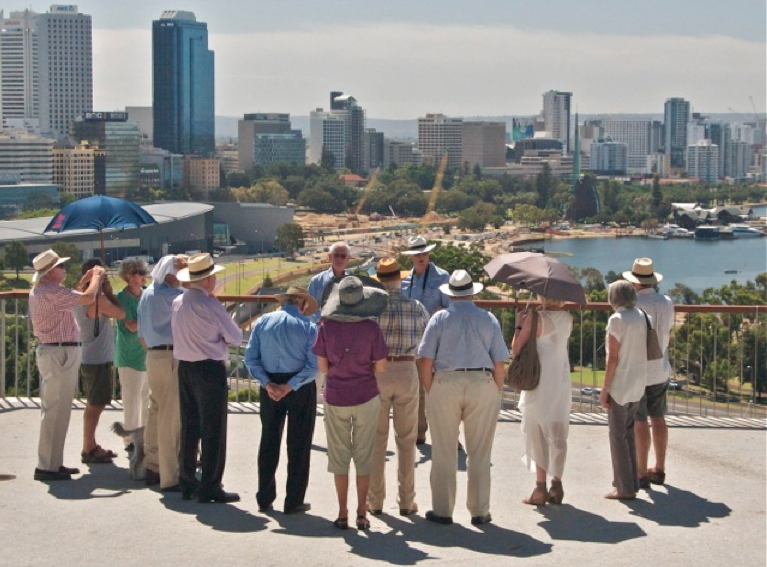 Photo and this description of photo was online connected to the URL westernsuburbsalliance.com; a site which has since disappeared. UNIQUE CITIZENS’ ENQUIRY REVEALS MAJOR TRAFFIC CHAOS TO RESULT FROM CLOSING RIVERSIDE DRIVE; CALLS FOR ELIZABETH QUAY SCHEME TO HALT AND BE REVISED.

The full URL that linked to the image was http://www.westernsuburbsalliance.org/2013/02/14/major-traffic-chaos-results-from-closing-riverside-drive/

Tour operator pulls out because of Elizabeth Quay construction

A tour operator has pulled its coach services out of the Barrack Street precinct in Perth because of worsening disruptions from construction works on the Elizabeth Quay Project.

It means hundreds fewer tourists a day are visiting the area, where traders say they are already suffering a loss of business because of the works.

Adams Group managing director Adam Barnard said they had long used the Barrack Street location as the main pick up and drop off point for tourists who were heading off sightseeing across Western Australia, but the situation had become untenable.

“From an operational perspective there was no choice, the disruption for our guests and visitors to Perth was just too much,” he said.

“The impact on us was basically places to park the vehicles, we were having to fight with construction vehicles and trucks.

“The area is already very small and congested and we just decided that our guests were not getting an experience that would make them want to come back to Perth.

“The construction is just on such a scale that it’s becoming untenable for everyone down there.”

Mr Barnard said the decision to change the coach dispatch location to the Perth Convention and Exhibition Centre was not taken lightly, and he was conscious of the loss of passing trade it would cause for other businesses operating in the Barrack Street precinct.

“Moving in to season it can be up to 400 people every day that we’ve now removed from that precinct as well, unfortunately,” he said.

At this stage the coach tours are not expected to return to the Barrack Street precinct until March next year.

Some Barrack Street precinct traders claim the construction works are hurting them financially, and are frustrated at being handballed between different agencies and ministers during negotiations with the State Government over two years.

The ABC understands some traders, who lease their premises from the Department of Transport, have been told to lodge a claim for compensation if they can prove their loss of earnings.

“It’s just not good enough for the Government to put the onus of responsibility on the small businesses that they’ve smashed through Elizabeth Quay.”

Transport Minister Dean Nalder declined to comment but the Department of Transport coastal infrastructure executive director Steve Jenkins confirmed it had requested information from tenants to substantiate claims and make an assessment.

“The department will work with tenants to progress the matter.”