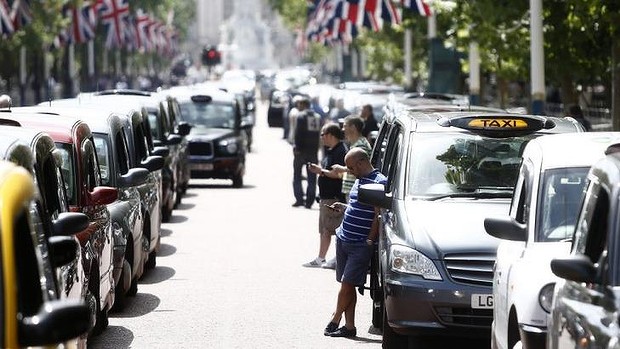 London taxi drivers took to the streets to protest against Uber in June. Photo: Bloomberg

TTN, 26th Sep 2014: Regulated taxi industries around the world are continuing to fight against Uber, the Google-backed app that lets citizens become drivers and drivers choose routes. Whilst governments and taxi lobbyists are vehemently against the service, arguing that passenger safety is jeopardised, the stories of market ‘rebellion’ against highly-regulated industries continue to fuel publicity for the app.

This story of British cab drivers from June continues to be studied as Australian state regulators determine what regulations can be enforced upon market-businesses with multiple, cross-industry legal jurisdictions, most notably Uber and AirBnB.

London: The Licensed Taxi Drivers Association has filed criminal proceedings in London against six Uber drivers, blocking transport officials from seeking guidance from a civil court on the mobile-phone app.

The move is the latest by taxi drivers to block the approval of Uber’s app, which connects passengers with cars. Transport for London said that its bid to have a civil court clarify rules for what constitutes a regulated taxi service would have to wait until criminal cases are finished.

Uber has come under fire by traditional taxi drivers worldwide who say they are bound by rules that don’t apply to the smartphone-based system. Last month cabbies in London snarled traffic, protesting against what they saw as the government’s failure to hold Uber to the same standards as other car services.

London taxi drivers took to the streets to protest against Uber in June. Photo: Bloomberg

“The reason we have gone down the private prosecution route as opposed to the judicial direction routes is that we have no confidence in TFL’s legal team,” Steve McNamara, the general secretary of the taxi drivers association, said.

The Uber drivers are scheduled to appear at Westminster Magistrate’s court towards the end of the month, Mr McNamara said.Charlotte Offredi, a spokeswoman for Uber in London, declined to comment on the criminal filings.

Uber said the decision by Transport for London to approve the app was a “victory for common sense, technology and innovation”.

Uber is working to expand from the US into Europe and Asia, and is available in more than 140 cities. The network was valued at $US17 billion ($18.2 billion) after it raised $US1.2 billion last month in a financing round.