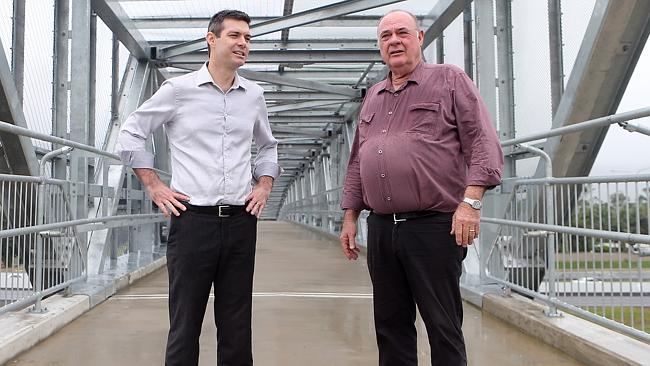 TTN: PIC: Cairns State MP Gavin King with Federal MP for the seat of Leichardt, Warren Entsch. News Limited have done a photo shoot to promote Queensland Liberal’s investments in infrastructure – some of which is being built to support an $8.15b investment that is, in theory, yet to be approved, including new roads to the Yorkey’s Knob proposed Aquis site.

CALLS are growing for an alternate entry to Cairns International Airport from the north if the Aquis mega-resort at Yorkeys Knob goes ahead.

The upgrade will reduce congestion and enhance access for 55,000 motorists who use the southern access into Cairns each day.

To the city’s north, the proposed $4.2 billion Aquis mega-resort has been flagged as a major source of traffic problems if it is approved.

This year, Barron River MP Michael Trout said three major projects would have to be fast-tracked and brought forward by five years from 2023 to 2018.

These include: a new dual-lane road between the Captain Cook Highway roundabout at the James Cook University turn-off, all the way to Yorkeys Knob; doubling lanes on the Cairns Western Arterial Rd between Brinsmead, including two new bridges and an overpass; and safety upgrades on the Kuranda Range to include bend straightening, more overtaking lanes and other works.

Cairns MP Gavin King said he had concerns about traffic worsening near the airport turn-off at Aeroglen if Aquis became a ­reality.

“I think the Lake St extension will alleviate the problems to some extent, but if you look at things like Aquis potentially coming online, the traffic out of the airport is only going to increase,’’ he said.

Mr King said he had had discussions about the issue with the Department of Transport and Main Roads and Cairns International Airport.

“I’d actually like to see an alternative entry/exit to the airport from the northside,’’ he said.

“I’ve spoke to the airport about that, and I just think again, with Aquis, for the northern suburbs, if you can have an entry/exit point on that northern end, that will certainly alleviate some of those problems on the existing entry point.”

Planning of Stage 2 of the Bruce Highway upgrade, to the city’s south, is well under way according to federal Leichhardt MP Warren Entsch.

The Federal Government committed $46.4 million towards the $58 million upgrade, in partnership with the State Government. Stage 2 consists of an upgrade to the Bruce Highway between Foster Rd and Robert Rd.

Mr Entsch said 424 direct and indirect jobs were supported over the course of construction of Stage 1 of the project.

“This has been good news for jobseekers in the region and has helped to boost economic activity not only in Cairns, but in the wider Queensland economy as well,’’ he said.