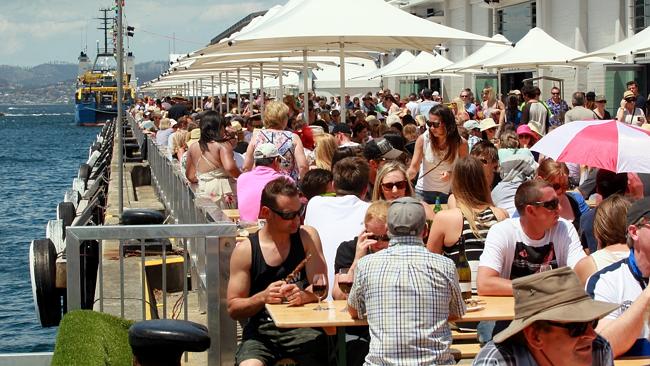 TTN: Hobart City Councillors are considering charging visitors to the boundlessly popular Taste of Tasmania festival. Alderman Sue Hickey has been quoted as suggesting a fee should be charged after Dark Mofo received unprecedented demand despite an entry fee.

THE Taste of Tasmania would go cashless under a plan being spruiked by festival co-­chairman Marti Zucco.

Alderman Zucco wants a “Taste card” that would operate like a credit card for the festival and gather a surcharge in place of an entry fee.

The idea will be put to council next week to coincide with debate about an entry fee to the summer festival that ­attracts hundreds of thousands of visitors to the Hobart waterfront during the New Year.

A Hobart City Council ­report looking into an entry fee of about $5 for the Taste of Tasmania will tabled next week.

The report followed a call from Alderman Sue Hickey for an entry fee to be considered after the success of the Dark Mofo Winter Feast that was subject to unprecedented ­demand despite an entry fee.

Ald Zucco said his card proposal, modelled on similar schemes at food festivals in other countries, could raise revenue for the Taste without having to have staff man the gates for the duration of the one-week event.

He said the cards and card recharging stations, which would have to be provided by the council, could generate the $400,000 each year.

“With every food or drink sale the card will automatically add a ‘Taste entry fee surcharge’ of about 5 per cent and, based on the sales on-site, this could generate around $400,000,” he said.

“The card could create a true user-pays principle at the Taste and will not create issues with the Kids in the Park or further expanding the area.

“This is not [taking] a percentage of the stallholders’ turnover as that would be inappropriate with stallholders already paying a massive premium in rental fees.”

Ald Hickey has suggested a “modest fee” of $5 per entry, with kids free and a $25 season pass as an option to help ease the cost to Hobart ratepayers of about $496,000 a year.