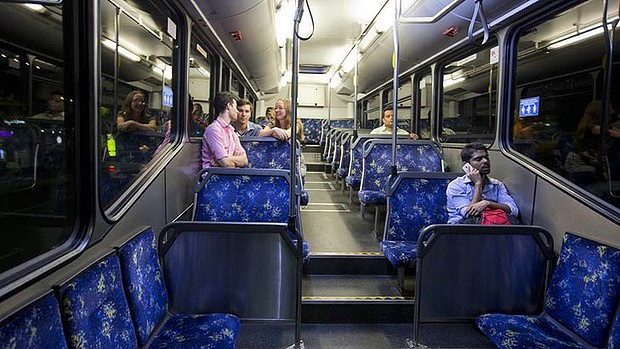 Late night travellers vote with their feet to dump NightRide

Public transport use has been steadily increasing in Sydney, with one exception. Patronage on the city’s NightRide buses – the only form of mass transport available to Sydney’s early-morning drinkers and late-night workers – is falling rapidly.

The NightRide buses are the backbone of the O’Farrell government’s transport response to concerns about alcohol-fuelled violence in central Sydney, after it rejected proposals for more late-night trains.

The sole transport initiative announced as part of the government’s crackdown on late night inner-city drinking was to cut the cost of travelling by bus from Kings Cross to Town Hall or Central, where people are encouraged to join the NightRide services that operate in lieu of trains.

“Buses will never be as popular as trains”. Photo: Steve Lunam

A spokesman for Transport for NSW would not offer an explanation for the drop, other than to say that the buses were ”a critical part of the NSW government’s response to alcohol-fuelled violence”.

Other transport advocates and tourism operators, however, say the buses will never be as popular as trains. Another explanation for the drop in patronage is the proliferation of bars and venues in Sydney’s suburbs, meaning fewer people are leaving the CBD late at night.

The patronage on the N40 from Town Hall to East Hills on Friday night/Saturday morning this week was split between people heading home after a night out and those finishing work late.

”This is the only option for me to reach home,” said Reazul Haque, who works at Woolworths near Town Hall and travels to Belmore.

”I feel like buses are more safe than trains – if I catch a train, it’s a problem if I’m sitting in a carriage with not too many people,” he said.

Nick Richardson, a student travelling home with friends Erin Rooney and Nathan Olivieri, said the NightRide was a financial necessity.

”I’ve got my MyMulti, I want to make the most of the money I’ve already spent,” he said. ”I can’t afford to get cabs home all the time. That’s just the reality of being a student.”

But Ms Rooney said she was often not aware the bus was an option. ”After midnight I pretty much assume they’re not running, so I would usually catch a cab,” she said. The NightRide buses were introduced by the Greiner government in 1989, when it stopped running all-night trains in Sydney. The government said one reason it wanted to get rid of all-night trains was so it could do track maintenance at night, rather than on weekends. However, this plan never eventuated.

John, a contract cleaner of CBD restaurants, travels to Wiley Park most nights on a NightRide about 1am. He said the service was generally reliable, ”but in this time bracket it starts to get a bit hairy.

”Sometimes the buses don’t turn up,” he said, ”but you can’t blame them if they break down.”

The one NightRide route that has increased patronage, according to the government’s figures, is the N100 between the city and Kings Cross.