Lasseter’s Reef getting closer with technology 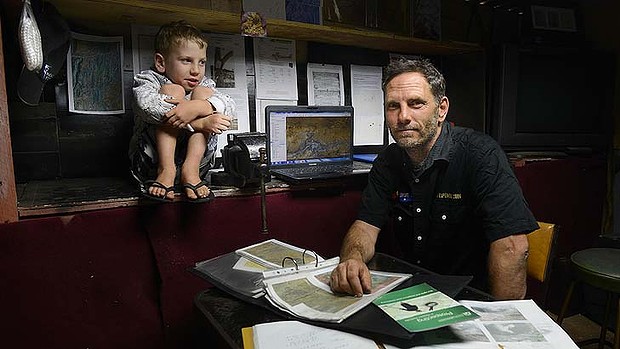 IT WAS a deal struck with a childhood handshake more than 30 years ago – a promise to strike it rich and solve Australia’s greatest outback mystery.

And next week, Jeff Harris and three mates are due to set off on a boys’ own adventure – in search of Lasseter’s Reef, the legendary gold deposit that has claimed the lives, and the reputations, of many before them.

One simple tool sets their expedition apart – Google Earth, cross-matched with sketches in Harold Lasseter’s diary which they believe has led them to the reef’s location.

“Once I’d figured out I could decipher the diary [using Google Earth] I was over the moon. I was staying up 24 hours a day working on it,” Mr Harris, 41, a handyman from Tamworth, said.

“Sometimes I’d have a day off work to work on it. I had to keep going until I found the next clue. The missus was quite frustrated, to say the least.”

It has been more than 80 years since Lasseter died alone in the outback, searching for a quartz reef containing gold “as thick as plums in a pudding”.

He claimed to have stumbled across it three decades earlier while lost in the desert.

Mr Harris and his best mate, Brendan Elliott, learnt of the legend as 10 year olds growing up in Wollongong. With a handshake, they pledged to find it.

Over the next 30 years they pored over maps, searched archives and travelled into the outback. The breakthrough came five years ago, the night Mr Harris’s son, Darcy, was born.

“I was sitting down celebrating the fact that I was a dad, and I happened to have the diary open, and Google Earth on the computer,” he said.

“I connected Google Earth with a spot in the diary and matched it with the direction Lasseter was going.”

Software such as Google Earth and NASA World Wind can be overlayed with free, publicly available data, such as the recently released ASTER maps, which show mineral groups and compositions, and other data showing magnetics and gravity.

“You could have it on your laptop, with a GPS, you can drive along the tracks in real time and flick these different data sets on and off,” Dr Blewett said.

“When you see things that are a bit anomalous, you might go there and do a bit of exploration.”

The entrepreneur Dick Smith, who is making a documentary about Lasseter’s Reef, encouraged people to keep searching.

“This is Australia’s El Dorado. We need to think there is a mysterious reef that someone found and no one has rediscovered. It’s part of our psyche,” he said.

Mr Harris and his mates have made four trips into the outback, chartering a plane and scouring the desert in 4WDs.

They plan to take soil samples on their next trip, from a site near the border of Western Australia and the Northern Territory.

While he expects it will show the existence of gold, there is more at stake, Mr Harris said.

“What I can prove is Lasseter was a great explorer, and he did find this place. For us, to prove that he was fair dinkum is good enough for me.”