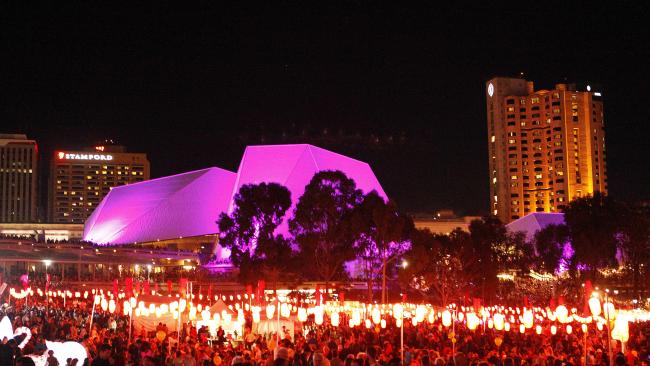 ORGANISERS of Sunday’s Moon Lantern Festival have apologised for long queues and a lack of public transport saying the event was a victim of its own success.

An estimated a crowd of more than 50,000 attended the Elder Park event on Sunday night.

Patrons took to social media complaining about a lack of food outlets, long queues, transport backlogs and that the parade for the festival had been changed at short notice, meaning many were not able to see the event.

Adelaide Festival Centre chief executive and artistic director Douglas Gautier said the “unprecedented popularity” of the event — which organisers said attracted the largest crowd ever at the Riverbank — had caused difficulties. He described the festival as a “learning experience”, but said the “overwhelming response” had been positive.

He said festival organisers had considered the SANFL grand final at Adelaide Oval.

“The view was that … planning had been put in place to deal with that, (but) the numbers on the night were beyond expectations,” he said.

“There was not enough food down in Elder Park and we will be talking to partners and everybody involved.”

“The DPTI apologises for any delay that anyone suffered on public transport last night but again it was the success of the event,” he said.