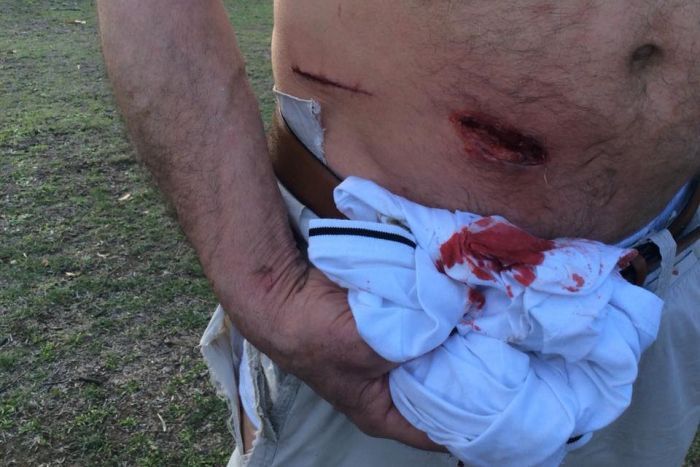 PHOTO: Experts say the kangaroos have lost their fear of people and have grown hungrier for the food being given to them. (Supplied: Shane Lewis)

As of 21st of May no further information has been released about how the agencies plan to work together to manage the risk of injury to tourists on behalf of the state. Hunter New England Health CEO Michael DiRienzo said on 3rd May only that visiting the hospital was discouraged, the same sentiment voiced in 2013 by then-acting General Manager, Marie Bacigalupo, indicating a general unwillingness by the regional health service to cooperate on management of the issue.

‘One lady got 17 stitches’: Kangaroos hopped up on carrots are attacking tourists

They are the cute and cuddly icons of Australia, but kangaroos are viciously attacking people at a popular tourist spot, and an addiction to carrots is to blame.

“There are people getting kicked and scratched at least every day,” tourist shuttle bus driver Shane Lewis said.

PHOTO: People are being seriously hurt in the kangaroo attacks. (Supplied: Shane Lewis)
“One lady got 17 stitches in her face from her eye to her chin.”

Every week, thousands of people flock to the unlikely tourist destination of Morisset Hospital in southern Lake Macquarie, where big mobs of kangaroos can always be found on the grassy slopes.

It’s less than a two-hour train ride from Sydney and the travel blogs promise “adorable wild kangaroos” that are “tame enough to get close to and take photos with”.

But too many tourists are dangling a carrot to get the perfect roo-selfie.

“The kangaroos see at least 2,000 tourists a week and they don’t need 2,000 carrots or bananas and bread, chips and biscuits,” Mr Lewis said.

“I’ve even seen some silly people feeding them McDonalds, KFC, corn chips, oats and there are some foods they are very aggressive for.”

Mr Lewis has made a business out of shuttling people from the Morisset train station to the kangaroos at the hospital, but wants more done to prevent people feeding them.

He said he did his best to educate people and warn them of the dangers and, over the past eight months, has been collecting photos of injured tourists to help convey the message.

“Once I show them the photos they usually pull their kids away and put their food away when they know what can actually happen,” he said.

“There was a guy who got his stomach gashed open and he wasn’t even feeding them but … they’d been to McDonalds 10 minutes before, so whether they still had the food smell on them I have no idea, but for some reason the kangaroo took to him.”

PHOTO: Tourist shuttle bus driver Shane Lewis says he does his best to warn people about the dangers of feeding the wild animals and has been collecting photos of injured tourists to convey the message. (Credit: Shane Lewis)

Carrots as bad as chocolate

According to the experts the kangaroos have most likely lost their fear of people, and have grown hungrier for the unnatural food being delivered to them.

“If they see a carrot and they’ve been fed a carrot 100 times before by a tourist, then they’re going to come up and take that carrot,” said Andrew Daly, an animal keeper at the Australian Reptile Park.

“And in doing so they can be quite aggressive. They can kick, they can scratch with their front paws and do quite a bit of damage, especially when they’re trying to get those foods that they really like, or could be addicted to.”

And if you thought a carrot was healthier for a kangaroo than junk food, think again.

“To a kangaroo a carrot is really, really high in sugar, so for us it’s quite healthy, but for a kangaroo it’s like having a chocolate bar.

“They can gorge or overfeed on them very easily.”

PHOTO: They may look cute, but kangaroos with an addiction to carrots can be dangerous. (Supplied: Tripadvisor)

And the result will not just be a fat and angry kangaroo.

Mr Daly said feeding kangaroos anything other than grass could cause them to develop deadly diseases.

“One in particular is called lumpy jaw and it’s where high sugar diets or any food that can be a bit abrasive in the mouth causes cuts and lesions and then a bacteria will get into those cuts,” he said.

“From there the disease develops and it’s generally fatal.”

There are signs zip-tied to traffic poles and nailed to trees at the Morisset Hospital issuing a warning to visitors.

“YOU HAVE ENTERED A WILDLIFE SANCTUARY. DO NOT FEED THE KANGAROOS!!”.

But the area is largely unpatrolled and the site is unregulated. There aren’t even public toilets.

Mr Lewis has called for more signage and has enlisted the help of local Lake Macquarie MP Greg Piper who last night raised the issue in NSW Parliament.

“Despite a number of warning signs placed throughout the area, people still come in droves and they feed the kangaroos processed foods,” he told Parliament.

“I was there only last week and saw tourists attempting to feed the roos corn chips.”

He also dismissed the idea of closing off the area, which has organically grown into Lake Macquarie’s biggest tourist drawcard.

“I don’t see how you can close off the area, you can try and discourage them, but I don’t think that’s going to work,” Mr Piper said.

“The fact is that the site is open to the public and it’s so heavily advertised, it’s well known, the genie is out of the bottle … it’s something we just have to manage.”