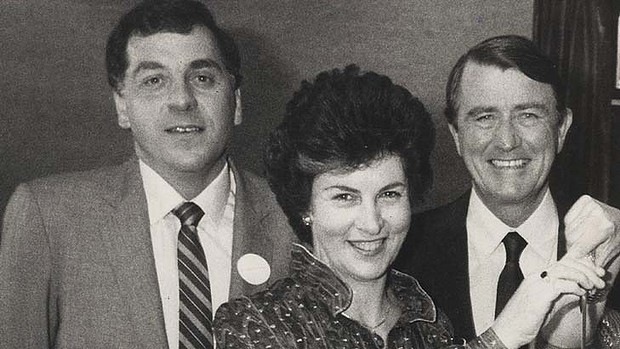 Then and now … Andrew Kalajzich with his wife, Megan, and premier Neville Wran in the 1980s.

TTN: This story is not ‘new’, but in the interest of quality news, TTN has discerned that this information is unknown to much of our audience and is therefore of interest.

He was the leading Manly entrepreneur who gave Sydney its first five-star beachside hotel. Now, after spending 25 years in jail for the murder of his wife Megan, Andrew Kalajzich has returned to his hospitality roots, resurfacing as the owner and manager of a modest motel on the remote northern fringes of the central coast.

The Sun-Herald can reveal that Mr Kalajzich is cooking breakfasts, changing bedsheets, sweeping lawns and manning the front desk at the Best Western Bridge View at Gorokan. It’s a far cry from the glory days of the mid-1980s when he was dining with the NSW premier and overseeing a multimillion-dollar business empire. But, according to the 71-year-old, today’s simple lifestyle away from the spotlight suits him down to the ground.

”I’m in transition mode,” he said last week. ”Coming out of jail and back into the real word is a big step. I’ve only been out for a few months but already, a lot of people have been very kind to me. Yes, I’m in the process of trying to re-establish myself. For that reason, I’m trying to go about my business quietly. I don’t want to advertise who I used to be.”

Andrew Kalajzich at work at his motel. Photo: Janie Barrett

Mr Kalajzich was raised in Australia by his Yugoslav migrant parents, who worked tirelessly to develop a fish-and-chip franchise in Manly. As a youngster, he learnt the ropes and then later, with his brother Tony, he purchased K’s Snapper Inn, adjoining his parents’ business, along the beachfront. In the years that followed, he became president of the Manly Chamber of Commerce and one of the first NSW tourism commissioners. In 1983, he unveiled Manly’s $16 million Manly Pacific International hotel, officially opened by the then premier, Neville Wran.

Less than three years later, though, Mr Kalajzich was making news headlines for different reasons. On January 27, 1986, his wife Megan was shot twice in the head as she lay next to him in bed at their Fairlight home. Manly mayor Julie Mellowes described the killing as ”the day Manly lost its innocence”.

At his wife’s funeral, Mr Kalajzich was comforted by several high profile friends including then federal minister for tourism John Brown, and then NSW sports minister Michael Cleary. But while the tight-knit northern beaches community rallied around him, detectives were busy unravelling a murder plot as astonishing as it was bizarre: the unofficial king of Manly had hired a hitman to kill his wife.

It would later be revealed that the assassin, Franciscus Wilhelmus ”Bill” Vandenberg, had bungled five earlier attempts to kill Megan. On the first occasion, his gun failed to fire; twice she wasn’t home when he crept into her bedroom; once he was put off by her son, who was lying watching television as he entered; and once Mr Kalajzich forgot to unlock the back door to let him in.

On the sixth attempt, Vandenberg killed his target. He entered the couple’s bedroom, aimed a rifle at Megan’s head and, while she was sleeping, fired two shots. He then fired a further two bullets into Mr Kalajzich’s pillow – after he had rolled off the bed, as agreed.

Mr Kalajzich was jailed for life in 1988 but his sentence was readjusted in 1997 to a minimum of 25 years under truth-in-sentencing legislation. He appealed, arguing the sentence was excessive, but his fight was dismissed in the Court of Criminal Appeal, in 1998.

The Parole Authority decided to release Mr Kalajzich in February this year after the Serious Offenders Review Council found he had been a model prisoner. Today, he continues to protest his innocence. Both his and Megan’s family, including her late mother, May Carmichael, have always pointed to a gross miscarriage of justice. In July, Mr Kalajzich gave an interview to Channel Seven’s Sunday Night, claiming police had framed him: ”What person would want to be there to carry out a murder of your wife, with her mother, and our son, in our home and I want to watch her die?” He has vowed to ”never give up” his crusade for ”justice”.

Last week, however, he refused to discuss the matter. ”I might want to talk more in 12 months but right now I have no comment to make. I’m just trying to move forward.”